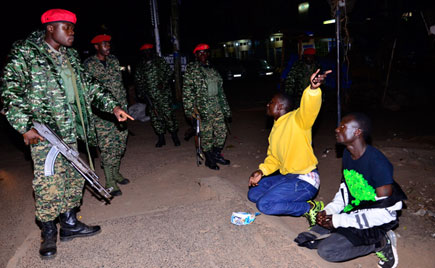 As the Ugandan plight continue to detest the NRM militant Local Defence Unit wing, it appears that a possible open bloodshed is inevitable as Tamale Mirundi predicted yesterday, on his political show. Just an hour back in Masanafu, a Kampala downscale neighbourhood in Rubaga division, there has been a bloody evening battle as charged vendors fought off the LDU troops who had come on their routinely vandalism of merchandise.

The vendors who deal in groceries and households say the LDU had heightened a tendency of vandalising merchandise whenever it clocks 19:00hrs of every other day. “They keep on patrolling and destroying our street stalls and merchandise. For how long will this go on? We are saying enough is enough,” says a maize seller who identified herself as Nalongo. “We are poor and we have families to feed. We cannot be oppressed each and every other day,” she adds.

Today’s scuffle sparked when one LDU officer attempted to confiscate a charcoal stove belonging to one of the Chapati sellers known as Kizito. “Clutched on his gun, he came direct to Kizito’s stall, poured all his chapatis down to the floor and tried to confiscate the charcoal stove,” reveals one witness who was at the scene. “He then tried to slap him and that is when Kizito resisted the battering,” he adds.

The Chapati seller reportedly fought off the visibly drunk LDU troops as he asked them if they had ever delivered any posho at his doorstep. “You do not feed my family. Did you ever give me your posho?,” shouted Kizito as he battled two LDU personnel attempting to arrest him. “I have just started working, you will not take my charcoal stove. This is all I have,” he added at his peak.

The scream attracted passers by and a mob swelled and charged at the bully LDU personnel. Fist fights ensued and violence intensified as people angrily hurled stones at the LDU and accused them of being monsters. “You have been killing us. Today we shall not let you leave alive,” the mob shouted. It took the intervention of the OC of Masanafu police station who appeared with a reinforcement to rescue the LDU from being lynched. He ordered them to let go of the vendors in a bid to save the scene from experiencing bloodshed. “Please let’s not create a scene. We are supposed to save lives. Stop harassing people,” the OC advised the LDU boys.

It should be noted that yesterday in a statement, Museveni ordered for the immediate disband of the LDU following their endless brutality meted out on Ugandans. The president asked the UPDF to take the unbecoming LDU through another 6 months training at Kimaka.