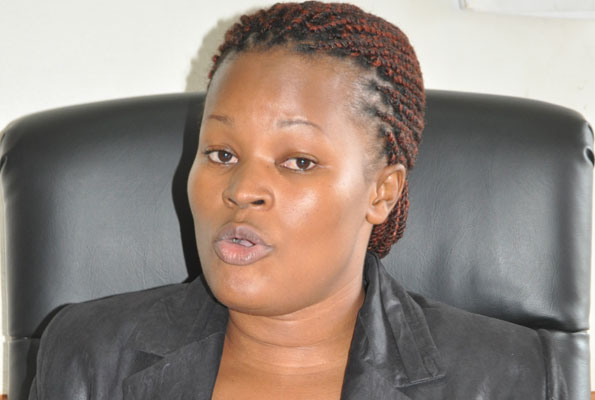 Former State Minister for Information and Communications Technology doubling as the Kayunga woman MP, Ida Erios Nantaba has refuted media reports that she had a hand in the Thursday arrest of legendary folklore singer, Gerald Kiweewa.

SEE ALSO: Bobi Wine speaks out on the arrest of Bizonto

Kiweewa is currently under police pending interrogation over a song he allegedly made mimicking the relationship between People Power youth wing leader also Mityana MP Zaake Francis Butebi and the embattled Minister, Nantaba. Speaking about Kiweewa’s arrest, the Kampala Metropolitan police spokesperson Patrick Onyango told journalists that they had arrested the artiste with consent from Minister Nantaba, something she’s adamantly refuting.

“We have arrested Gerald Kiweewa because we recorded a complaint from Hon. Ida Nantaba saying lyrics in the song directly attack and defame her,” Onyango told the press.

However, in a recent TV interview, Nantaba denied having a hand in Kiweewa’s arrest. Nantaba distanced herself from knowing neither the artiste nor the song itself. She also stressed that she is not the only existing person with the name, Nantaba. “I don’t own the Nantaba name. Anyone is free to use it,” Nantaba said. “We have heard many songs with different names but no one came up to make any arrest,” she added.

Titled, ‘Nantaba’, Kiweewa’s hit song talks about the on and off embattled relationship between the fictional Zaake and Nantaba who are allegedly love birds. Nantaba however is also eyed by the superior leader of the land and yet she also enjoys a tight affair with Zaake. The leader deploys security to clobber Zaake in a bid to scare him off ‘his’ Nantaba.