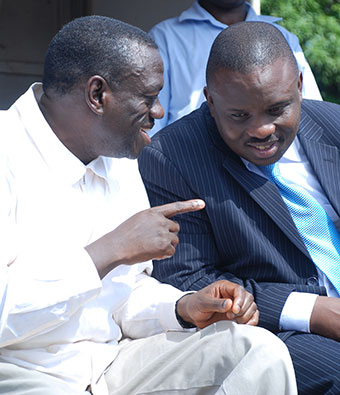 As the struggle to entice Besigye for his perennial role as the Forum for Democratic Change presidential flag bearer hits a snug, there are ongoing engagements to have Kampala city Lord Mayor, Erias Lukwago to take up the mantle.

This site has reliably learnt that FDC bigwigs have for the past fortnight fruitlessly wooed their party strongman, Kizza Besigye for a re-run a thing he has adamantly declined to heed to. A well placed source privy to the developments says Besigye accused all party bigwigs of being traitors who have ‘abandoned’ the struggle at the expense of their selfish deeds. “There was a meeting at Kasangati led by the Leader of Opposition, Betty Aol Ochan last week. For two good days, they pleaded with Besigye to do the FDC party a favour to return in the coming elections,” the source told this site. “He however accused them of being hypocrites who are just settling for the offices they occupy upon winning the elections,” he adds.

The four time presidential nominee even clarified today on the NBS morning breeze show how he was not to appear on the 2021 ballot. This has left several FDC bigwigs in unprecedented panic as most foresee their once unified chariot heading to doom. “We cannot imagine an election without Besigye. How will it appear like?,” retorted an FDC NEC member. “We anticipate a low voter turn up since most Besigye supporters won’t vote,” he adds.

We rang Besigye’s office at Katonga road for a comment and we ably quoted his justification for not participating in the 2021 polls. Besigye said, “We must have an election where we’ve trained fighters who can fight for the vote.” He added, “We don’t want voters who will just vote and leave the polling stations. The vote is the people’s power and people must prove so by being ready to defend their mandate at all costs.”

With Besigye remaining opposed to reappearing on the 2021 ballot, a highly placed source has revealed to this site that the FDC party leadership is courting City Lord Mayor, Erias Lukwago who doubles as the Deputy president of The People’s Government to hold the party flag. We’ve been tipped of a mega function slated for Tuesday at the FDC headquarters where all flag bearers at each level are to grace the event by endorsing Lukwago and swearing allegiance to his trail.