Besigye and Museveni are 2 faces on the same coin-Mwenda 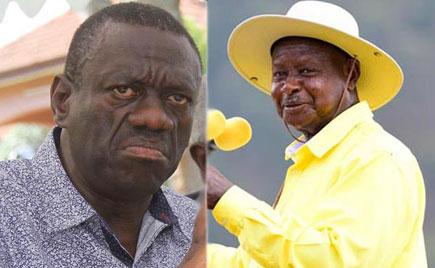 Renowned veteran journalist, Andrew Mujuni Mwenda has today fired shots at the four time presidential aspirant, Rtd. Col. Dr. Kizza Besigye over his failure to clarify on his fate on the ballot ahead of the 2021 polls. Mwenda was reacting to Besigye’s morning comments on the NBS morning breeze where when he was asked about his possible return to the ballot and he stated, “I am fighting this mindset of people thinking the issue right now is me standing for office. The issue is how we get out of captivity and not focus on whether I will stand for office.”

Reacting through his Twitter handle, Mwenda who has been a prolonged critique of Besigye accused him of playing double standards by allegedly imitating the man he vigorously opposes.

Mwenda triggered the debate when he tweeted; “Besigye is beating about the bush in regard whether he will run for president this year, sounds like Museveni! Besigye says he is in struggle to establish democracy, Museveni says he is in one to transform Uganda! The success in both is open ended! Both won’t quit.” He added, “Just like Museveni sees himself as the only person in who can transform Uganda. Besigye thinks he is the only one who can defeat Museveni. This is what being delusional means!”

He concludes by stating that the duo bear wrong convictions of thinking that Uganda cannot operate without their involvement. Quoting him verbatim, Mwenda writes, “The problem here is not that either men are greedy for power that would be the smaller part! The problem is a highly cultivated self righteousness and an exaggerated self confidence! Uganda can exist well without either men. That is the lesson both need to learn.”

So far, Museveni has already openly expressed his intent to return for the sixth consecutive term of presidency under the NRM ticket as the party NEC has already fronted him as the sole flag bearer. Besigye on the other hand has not yet picked the FDC flag nominations but sources say, at tomorrow’s big event at the party headquarters in Najjanankumbi, an official declaration is to be made though fingers are already anticipating city Lord Mayor, Erias Lukwago as the potential replacement to the FDC strongman.