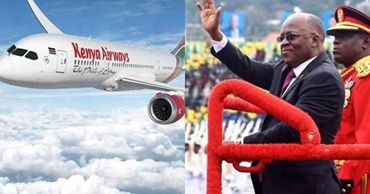 Tanzania has again dealt Kenya another blow. It is not clear why President John Pombe Magufuli is so angry but only time will tell. Magufuli says Tanzania will not allow any Kenya Airways flight between Nairobi, Dar-es-saalam, Kilimanjaro and Zanzibar effective today. (Augast 1)

“The Authority regrets to inform you that in a reciprocal basis, the Tanzanian government has decided to nullify its approval of Kenya Airways (KQ) flights between Nairobi and Dar es Salaam/
Zanzibar/Kilimajaro effective August 1, 2020,” said the Tanzanian authority.

Kenya opened her international airspace to international airlines starting on August 1, 2020. This was after President Uhuru Kenyatta lifted the cessation of movement by air in and out of the country apart from cargo plane. During the week, the Ministry of Transport released a list of eleven countries allowed to fly into the country but Tanzania was missing.

Sources say Magufuli was furious during his speech on July 27, 2020, President Uhuru Kenyatta seemed to “imply that John Pombe Magufuli was downplaying the impact of Covid-19 in his country.” President Magufuli has since declared Tanzania a Covid-free nation saying that Tanzanians had prayed and that God had healed them of # Covid
-19.

This also comes just days after a delegation sent by President Uhuru Kenyatta to former Tanzania President Benjamin Mkapa’s burial. It is alleged that Tanzanian Authorities announced during Mkapa’s farewell ceremony that the Kenyan delegation could not attend the event. Reason given? it was due to bad weather.