We came together as a generation, Bobi tells off Rubongoya critics 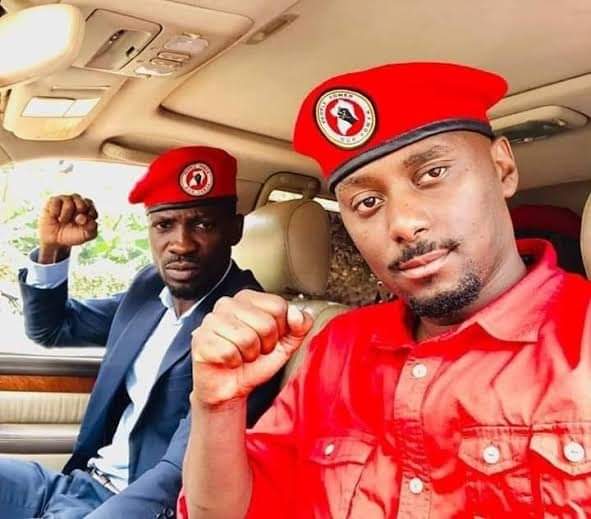 The People Power/NUP principal, Robert Kyagulanyi Ssentamu alias Bobi Wine has finally come out to defend his executive secretary, Lewis Rubongoya from the wrath of critics who have for the past days castigated him over past photos with Museveni.

Lewis had been subjected to scrutiny by NRM propagandists guising as People Power supporters. The intent of the leaked photos was to demonize Lewis and detract him out of the struggle and depict him to the People Power disciples as an unreliable figure. In a voluminous Facebook post, Bobi Wine writes;

I have seen a few posts from people who purport to struggle for change in Uganda, casting doubts on some of the closest people I work with. Some of the doubts are premised on these comrades’ past relationship with the NRM regime, while others base their doubts on other unfortunate factors such as the tribes which these comrades belong to.

I do not normally respond to these comments because in most cases they are not born out of good intentions, but intended to distract us. However, I am responding briefly, for the sake of well intentioned comrades who may be misled as a result of the targeted propaganda.

Comrades, we are a generation that came together to seek a new consensus and a new direction for our country. The comrades who have been at the helm of the People Power Movement for the past three years come from different tribes, religions, and political affiliations. Our Movement was and continues to be shaped by Ugandans who felt oppressed, suppressed and exploited- regardless of who they are or where they come from. That is what makes us different. We are the National Unity Platform- a platform that brings together people from all walks of life to contribute towards making Uganda better.

Five years ago, I was not as politically conscious as I am today. It would be unfortunate for some one who has been in opposition politics for 15 years to question why I am at the helm of the struggle against Museveni.

Likewise, when I met our Executive Secretary, David Lewis Rubongoya in 2016, he was an NRM supporter who disagreed with many things in there, but like many other people, remained part of them. At some point, he made the conclusion that he must step out of the NRM and together with other friends, we started the People Power Movement.

Our Deputy Executive Secretary, comrade Aisha Kabanda is a former RDC. When I first interacted with her, some people cautioned me not to trust her or bring her close, but see what incredible work she is doing for the forces of change.

The head of our legal team, comrade Katana Benjamin is a former spokesman for the internal affairs ministry and an NRM supporter. Yet, every day, alongside other lawyers, these comrades represent us and rescue us from prisons. It would be ignorant for anyone to raise doubts about him, only because he worked for the regime in the past.

My own brother, comrade Nyanzi Fred Ssentamu has in the past been a member of the NRM and even run for office on their ticket but he cut ties with the regime for obvious reasons and together we founded the People Power Movement and consequently the National Unity Platform.

I can give countless examples of other comrades who belonged to the NRM and other political formations, but found a home in People Power. This is our DNA.

Majority of the people who oppose Museveni today supported him at some point in the past including myself and some of the leading opposition leaders over the years. Actually, those who worked closely with him have tended to mount the strongest opposition against him because they understand his character better.
When you are betrayed by someone you hold in high regard, the effect is felt even much more. For example, I know that comrades Lewis and Katana broke ranks with the NRM the moment talk of the age limit bill started. These are clear headed comrades who thought that perhaps sanity would be restored in the NRM if President Museveni retired like he had promised. With the age limit bill looming, it became clear to them that there was no end in sight to the corruption and mismanagement of our country.

It is very confusing that NRM supporters rejoice when the regime bribes some of our weak hearted supporters to turn against the people. But when someone abandons the dictatorship and joins the forces of change, some people choose to brand them moles. Where is the logic?
In any case, some of the leading people who have pushed this struggle to where it is, are previous Ministers or strong pillars of the NRM.

As I have been saying time and again, we must judge people by their actions. Whoever quickens Museveni’s fall is a comrade. Whoever delays it is an enemy to our struggle. That is the criteria we must use at all times. Let me also repeat what I said recently- if you have trusted us to lead the struggle, then trust us also to decide who is for us and who is against us. If you have credible information that anyone is working from within to undermine our struggle, reach out to us privately let us know (and many people do). We shall find ways of dealing with the information given.