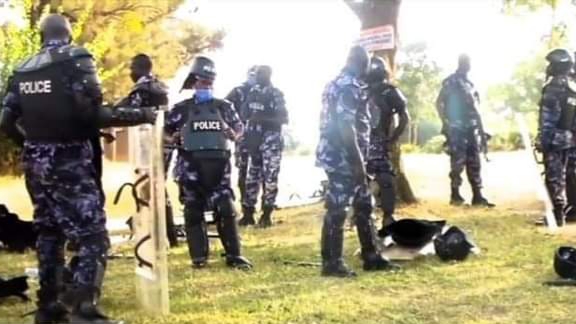 Police, army and other security organs in Mubende district had a very busy day, Saturday surrounding different radio stations on fake notice that the People Power -Uganda principal and the President of the National Unity Platform, [NUP] Kyagulanyi Ssentamu Robert alias Bobi Wine was going to appear on one of the Radio stations.

Point FM, Mubende FM and Heart FM programs managers were ordered not to put on air any political show since they were not certain of the exact radio station that Bobi Wine was going to be hosted.

According to Sam Balaba Director Point FM, Police and Army entered their studios looking for Bobi Wine in every corner intercepting everything something that they condemned because hosting anybody on a radio station depends on Radio station’s management and not security organs management or whatsoever.

People Power Spokesperson (NUP) Joel Ssenyonyi said on his official Facebook page that, “Today Police in Mubende deployed heavily at three radio stations and told presenters to cancel all shows, because they somehow imagined that Hon Kyagulanyi was going there. Meanwhile, he was busy with several engagements in Kampala and had no intentions of going to Mubende at all. These guys will soon fear their own shadows! Of-course Hon Kyagulanyi will go there sometime plus other radio stations in different parts of the country, nanti they said politics is to be done on radio, sikyo?”