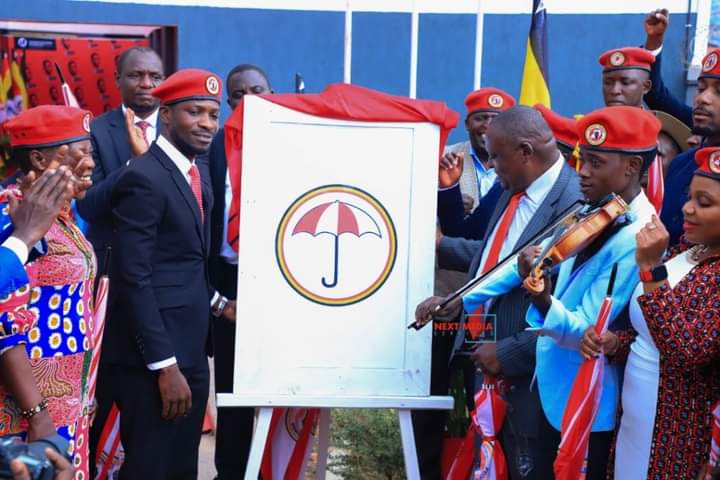 The Electoral Commission has today asked the Kyadondo East legislator and NUP president, Robert Kyagulanyi Ssentamu to concede and surrender the red color back to the said rightful owners of the Uganda People’s Congress, UPC party.

The warning comes moments after the same commission meddled into the matter of the party symbol of the umbrella as they rebranded it back to the White color as opposed to the red color that is identical to Uganda’s largest opposition wave dubbed People Power.

By the time of filing this report, the Electoral Commission had not yet released a formal communication but sources say justice Byabakama is embittered towards the NUP. “We had a meeting today morning and we surreptitiously agreed to warn the NUP members against using color red which us gazetted for the UPC,” says a source in the EC. “We have been bombarded with complaints from the UPC president, Jimmy Akena claiming that their party color has been engulfed by Bobi Wine,” he adds.

Earlier last week, the UPC president warned the Kyadondo East legislator, Robert Kyagulanyi Ssentamu against breaching the laws governing the political parties. In his petition, MP Akena rallied the EC to take immediate action on NUP claiming that they were confusing UPC supporters. Even during the UPC delegates meeting in Wakiso, a section of UPC supporters tasked their party president to take action on NUP which appeared to be absorbing one of Uganda’s oldest political parties.

According to registration details at the Electoral Commission, NUP was given the dark blue color and the commission has advised MP Kyagulanyi to immediately start popularizing the dark blue and white colors for the NUP party instead of annexing the UPC colours.