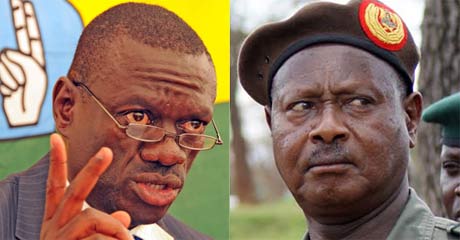 Four time Forum for Democratic Change presidential candidate, Rtd. Col. Dr. Kizza Besigye has weighed in on Museveni’s directive to have all aspirants intending to hold elective positions tested for COVID-19. The all seasoned opposition figure accuses Museveni of targeting specific opponents and keep them off the public scene under the guise of institutional quarantine.

In a tweet statement, Dr. Besigye wonders how an incumbent Museveni would direct the Electoral Commission to dance to his tunes. “Why should “sole candidate” Museveni order his (MOH) officials to test all his political opponents? What’s the scientific justification to protect the “candidates” or the people? This is why PRIVATE facilities are vital in Uganda’s political COVID-19 control,” Besigye tweets.

The foresighted Besigye warns Museveni’s opponents that they may end up in the indefinite quarantine while the dictator and his political players lounge freely. “Soon, opponents of NRM/M7 Junta will be on their way to #COVID19 “institutional quarantine” for indefinite stay!,” he further warns. “Uganda will now squarely contend with partisan COVID-19 management that we were concerned about from pandemic onset- National task force under OPM & District teams under RDCs; Health Minister now Lira NRM candidate!,” the thread further reads.

In a controversial directive issued last week, Museveni ordered the Electoral Commission to liaise with the Ministry of Health and urge all contestants for political office to be subjected to mandatory COVID-19 testing. Museveni’s directive was revealed by the NRM party secretary general, Kasule Lumumba who justified it on grounds that candidates are already interacting and mixing with the public.