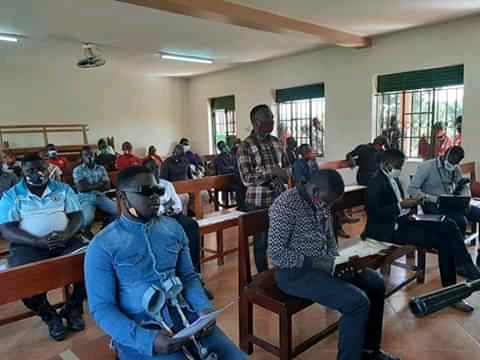 Court has dropped charges against the Mityana Municipality legislator Francis Zaake Butebi who was accused of flouting COVID-19 guidelines after he was found disturbing food relief to his constituents.

“This is to inform Mityana Magistrates Court that the DPP has decided to discontinue proceedings against MP Francis Zaake Butebi,” said the Director of Public Prosecution (DPP) Jane Frances Abodo 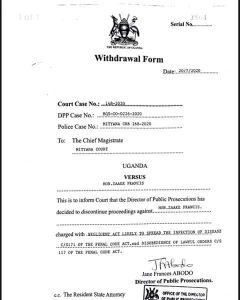 On April 19, Mr Zaake was arrested at his home in Mityana District by military and police personnel led by Mr Mwine and Mr Kamakura. He was allegedly tortured, beaten to pulp and detained without trial for 10 days until April 29. During his incarceration, he says he was detained at several facilities, including Mityana Police Station, UPDF’s Chieftaincy of Military Intelligence headquarters in Mbuya and Uganda Police Force’s Special Investigations Unit headquarters in Kireka.

Meanwhile, Photos and videos of several NRM aspirants flouting measures against the spread of Coronavirus have been shared widely without any form of arrest including Health Minister Dr. Ruth Aceng.

This was not the first time that Zaake has been allegedly tortured at the hands of the security. He suffered Similar treatment during the infamous arrests that preceded the election of Kassiano Wadri as the member of parliament for Arua Municipality.