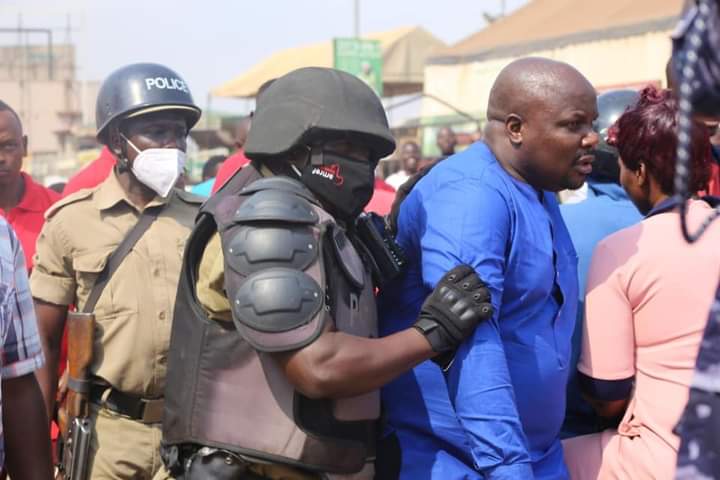 Drama ensued on Saturday morning as incumbent Kawempe South legislator of the Forum for Democratic Change influenced his own arrest in an attempt to make a political comeback. Reflecting on the recent remarks of the FDC party secretary general, Nandala Mafabi’s accusations on incumbent Nabillah Naggayi Ssempala whom he claimed faked her 2016 arrest to win the election, we are yet again seeing his accusations reflect in Munyagwa’s Saturday script.

The fading COSASE boss acting under pressure exerted by People Power’s Roy Ssemboga and Kazibwe Bashir, today resurfaced in his constituency after a while of disappearance. He surfaced to open the FDC Kawempe division offices in a ceremony where police too seemed to be on the guest list. Being a seasonal politician, Munyagwa is famed for staging political stunts to draw him sympathetic support. He is a man who knows when to make his way into the media but this time round what our observers extracted from the ground indicates that his candle flame is likely to be blown off by the People Power movement which has gained momentum in his constituency while the FDC strongman hid to peacefully chew his COSASE loot. Our snoops found that the People Power movement has deeply entrenched in the Kawempe structures. We barely walked ten feet without encountering a person donned in a red beret.

In the previous 2016 general elections, a calculative Munyagwa woke up one early morning with a wheelbarrow of bread which he pushed to Mulago hospital to do camera ‘charity’. He was arrested that day and became the talk of the news, a thing that drew him massive support that year. As if the bread stunt was not enough that year, he went ahead to abduct himself to relieve himself of the stressful campaign duties.

“Munyagwa is a con man and we vow not to vote for him this time round,” fumes Abdul Shafiq Mugerwa. “He promised water for the Masjid but up to now, we’ve never got even a single drop. He is a liar and a gambler,” he adds.

Rachael Tusingwire, a street vendor in Kawempe says Munyagwa’s time is up and that he should peacefully embrace a transition to the new kid on the block, Roy Ssemboga.

Apr 14, 2021 Emmanuel Busingye
Do NOT follow this link or you will be banned from the site!
Don`t copy text!