I have the Majje-Minister Anite joins Aceng, M7 in flouting covid guidelines 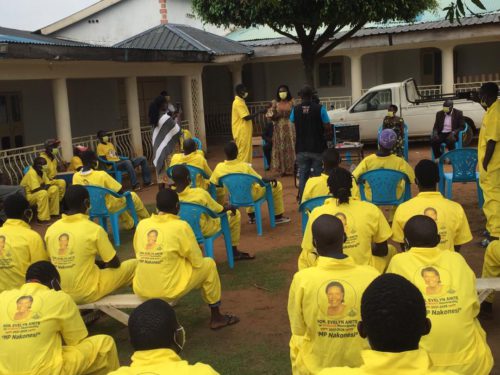 The State Minister of Finace for Investment and Privatisation, Evelyn Anite has joined fellow Ministers; Aceng, Kamuntu, Kibazanga and Kasolo in flouting guidelines they ironically created in their cabinet resolutions against the novel Corona virus disease. Anite has yet again hit the spotlight in a controversial bid to tighten her political grip on Koboko where she is vying for Member of Parliament under the NRM ticket.

Acting out of panic as she was a year back quoted by the press, assuring Mr. Museveni that she was to wipe out Bobi Wine’s People Power movement from the West Nile region, the Minister could not hold her cool after getting reports the contrary to her imaginations. According to reports on ground, Anite could not believe that the People Power movement she struggles hard to block had already deeply entrenched the West Nile region while she slumbered on her ministerial duties. “The Minister quarreled with the RDC on Thursday when she encountered a group of youths who returned from a football game donning in red berets,” reveals a source close to Anite. “She asked the RDC to explain how People Power was gaining ground in the West Nile which she had all along thought to be a stronghold of the NRM,” adds the source.

According to local press reports, the fury fledged Anite could not hold her rage and immediately asked the RDC to mobilise for her a group of youths to don in yellow NRM outfits in exchange for shs 10,000 to accompany her through town in what appeared to be a political procession. In a mobile footage making rounds on social media, the Minister, Evelyn Anite is seen holding a campaign procession in her home area, Koboko. Police recently said aspirants are not allowed to hold any processions due to the COVID-19 pandemic with aspirants only allowed to move with a maximum of 2 people but Anite, Kibazanga, Kamuntu and several ministers have done the otherwise. President Museveni too was this week seen flouting his own guidelines when he dangerously convened a crowd in Lubigi area as he officiated the drainage channel system.

Despite advising Museveni to stick to the scientific elections, cabinet ministers have routinely spearheaded the flouting of the very guidelines they played a part in creating. The most prominent deviant was the Health Minister, Jane Ruth Aceng who similarly gathered a crowd in Lira where she bids for the woman MP seat. Analysts anticipate an increment in the deviation from the existing covid regulations as the country heads to the polls.