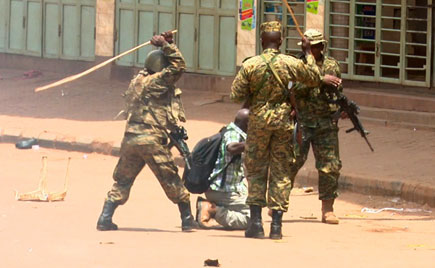 “We reaffirm the vital role that a free press plays in the DEMOCRACY of any Country and how it works as a shining light on the many challenges and cruelties to that Country and the World at large for the best,” writes PATRICIA SSEWUNGU.

SEE ALSO: Ugandans take to Social Media to Commemorate the International Day in Support of Victims of Torture by Condemning the Unwavering Torture meted on Citizens By State Police Agencies.

Journalists give citizens a chance to know the truth about their countries, themselves and governments which makes it better and a stronger entity. In Uganda it’s becoming increasingly frustrating for Journalists to execute their work freely without the iron hand of the repressive regime. Journalists worldwide give a voice to the voiceless, expose injustices and hold leaders accountable but for Uganda, this is something gravely abused to the extreme.
Edward Snowden said, ”arguing that you do not care about the right to privacy because you have nothing to hide is like saying that you don’t care about free speech because you have nothing to say.” Free speech can be conceptualized as having the right to express oneself, have diverse opinions, and have the right to seek, produce, and convey information without any restraint.
Media freedom in Uganda is at its worst in such an era where the world is moving at a very faster rate.

Post-independence media in Uganda has endured and withered the storm of state oppression and censorship. For a very long time freely expressing oneself has been a deathly taboo and there is a common joke on the streets that says “freedom of speech in Uganda is guaranteed however freedom after speech is negotiable.”
Notably in the 70s during the dark reign of Idi Amin, many journalists disappeared and were never to be seen again, some murdered in cold blood for articles written or utterances made on radio that did not go down well with the then Idi Amin establishment. Unfortunately it’s 2020 but the memories of the 70s seem to be back to haunt Uganda this time in a rather different camouflage.

In 1986, Uganda welcomed a new dawn.The then National Resistance Army (NRA) under the leadership of Yoweri Museveni captured power amidst jubilations among the population for they saw Museveni and his group as liberators and it’s then that one of the most iconic quotes perhaps in Uganda’s political history was made at the steps of parliament a promise that what had just happened was not just a mere change of guard but a fundamental change. Don’t forget that chief among other ills that permeated our country was the apparent lack of freedom of expression that applies to the media too. Sadly Ugandans still cry and the essence of that famous quote brings more questions than answers in that a guerilla war that lasted 5 years claiming lives of over half a million Ugandans has been a curse to Ugandans Journalists alike.

In 1990, a Danish documentary on Uganda, over the depth of the Press freedom to the Country gives an insight to this argurment. To the surprise of many, the documentary showed that the fundamental change promised 4 years earlier was nothing but a sold LIE to the Country and its freedom. The narrator at one point exclaimed that, “A free press in Africa, a rare thing in Africa”. The new government seemed to have given Ugandans more of the same only that this time it was a little veiled in ideology. There was a semblance of media freedom on the surface BUT underground the Government was infiltrating media houses, bribing journalists, threatening to arrest or censor what they could and could not say on air just 4 years after the claimed liberation.

Fast forward the Year is 2020 recent examples of violence towards the media by state agencies are showing and notably on the opposition. A young political opponent on the scene giving the regime a serious run in Hon Robert Kyagulanyi Ssentamu is facing the Music of his own struggle and fight against Yoweri Museveni with all sorts dung thrown at him and challenges that so disturbing to the greater public. At the height of his strong emergency in the Arua By-elections, Hon Robert Kyagulanyi was tortured and arrested. Following the Arua fracas and as protests erupted on the streets a one James Akena, Reuters Journalist covering these protests was seen being clobbered by army men under the glare of the cameras. Is this what NRM promised?, No! Sadly or politically, President Museveni came out later to defend the action saying the soldiers had mistaken the Journalist for a thief.
In 2009 during the Kayunga riots, several radio stations had their licenses revoked notably CBS FM and the reason government gave was that the radio was being used to promote sectarian tendencies now this is NRM at their best.
In 2013, the Daily monitor a Pro-Independent minded Newspaper was shut down for more than a week for producing a letter that alleged that president Museveni was grooming his son to take over power and the source that was needed is something against media guidelines.
As we are heading to the 2021 general elections, the ministry of health and the electoral commission have agreed and decided that there will be no mass rallies like it has been in the past due to the COVID 19 pandemic and campaigns would be conducted over the media – Here we are and the media is again a major player however it has vehemently been opposed by many citing the apparent lack of fairness by the state over freedom of expression to the Journalists.

Opposition figures are being mistreated on some media platforms as the Government long hand rides high. True to this, there is an ongoing trend by the state to frustrate opposition politicians from accessing these media houses for example just a week ago Hon. Robert Kyagulanyi Ssentamu was blatantly stopped from accessing a radio talk show in Mbale under unclear circumstances.
It should be noted that the same has happened to many opposition figures since 1986 and surprisingly they have never been charged for any crime if there’s any.
Media owners are in panic mode and don’t feel too comfortable as 2021 looms because hosting opposition figures has its own hard consequences. This is a clear indication that media freedom in Uganda can only be heard in rhetoric but the reality of the practice leaves a lot to be desired.
FREE JOURNALISTS!!!