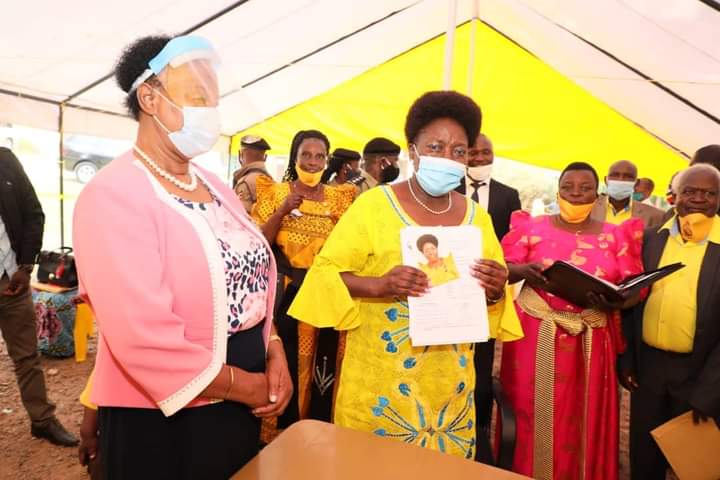 The speaker of the tenth parliament, Rebecca Alitwala Kadaga has shockingly pronounced the 2017 passing of the age limit bill to have been her greatest achievement ever in the entirety of her political career.

Kadaga made these remarks while appearing before the NRM vetting committee today at Kyadondo road in Kampala. She also picked her lifetime party flag for the Kamuli woman MP seat which she has served from the time of the Constituency Assembly (CA). The former Busoga power broker is apparently losing grip of the region which had once been a stronghold of the ruling NRM party but now is embracing the People Power ideology. Her political nemesis, the state Minister for lands, Persis Namuganza is said to be giving the 72 year old tireless politician sleepless nights as they both bid for the NRM national Vice Chairperson seat of the Central Executive Committee (CEC).

The 36 year old minister, Namuganza centres her candidacy on the urge to embrace a transition from the old guard to the young generation. “The young people should feel [that] they have space in their party. And why are they running away from the party and joining these pressure groups? I want to emphasise and strengthen the grassroots mobilisation of the NRM among the young people. My time of coming in is now. It cannot be later,” Ms Namuganza told the media.

Sources at the NRM secretariat reveal that Kadaga is now struggling to win back the favour of her party top leadership which seems to be siding with a young Namuganza. Although Kadaga has the support of the opposition MPs from FDC, Namuganza insists that she will not back out of the race and that not even Museveni will stop her from vying. “Kadaga has been dodging pro-NRM bills in her term as speaker. She dodged the age limit debate and now she wants to continue leading the party,” Namuganza wondered.

In a twist of events to win her the college support, Kadaga is now attributing the passing of the controversial age limit to be her greatest legacy. “The age limit bill will be the biggest achievement and a legacy I hold as speaker of this parliament,” Kadaga reportedly told the vetting committee. “If re-elected as the NRM Vice, I will abet the passing of more bills that favour my party,” she added.