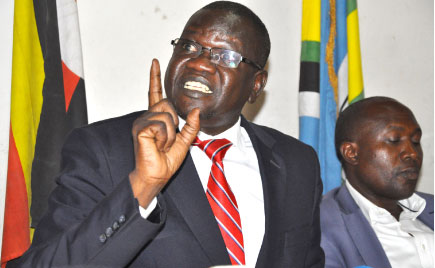 As Uganda’s leading opposition party, Forum for Democratic Change continues to be haunted by the leadership vacuum, a fresh row between the party spokesperson, Ssemujju Nganda and party president Patrick Amuriat Oboi has ignited. The two leaders have bitterly disagreed on sole the candidacy of the party perennial flag bearer, Rtd. Col. Dr. Kizza Besigye.

The party spokesperson, Ibrahim Semujju Nganda has strongly contested the recent remarks made by Amuriat who stressed that the party would not consider any other candidate in case Dr. Besigye picks the nomination forms. An inside source in the FDC says Nganda wants the party to stick to its core principles of democracy as opposed to Amuriat’s patronage of rewarding Besigye the flag once more without following the rightful criteria. “Nganda says he has no objection with fronting Besigye if only he goes through the right process,” says the source. “Amuriat on the other hand insists that Besigye should be rewarded one more chance to lock horns with NRM’s Yoweri Museveni,” the source further adds.

Nganda referred to the party president’s remarks on fronting Dr Kizza Besigye as the flag bearer for president in 2021, as a wish, and not in the constitution of the party. Patrick Oboi Amuriat speaking in Gulu on the weekend said that the FDC’s National Executive Committee had agreed that if Besigye expresses interest to seek the party flag, there will be no competition and the flag would be automatically gifted to him.

With less than six months to the final whistle of the 2021 poll, FDC remains stranded and stuck in an unprecedented leadership vacuum following Besigye’s persistent refusal to re-surface on the 2021 ballot. Although the party tried to entice Besigye into making a re-run, the once roaring lion seems to be adamant on adhering to the requests. Sources say even Lukwago who had favourably been groomed to take over from Besigye, declined the offer insisting that he would not risk burying his political career in case he faces a political nose blow from NUP strongman, Robert Kyagulanyi Ssentamu alias Bobi Wine. Lukwago preferred to stick to Lord Mayor leaving the FDC party stranded with nominations slated for 15, August with so far no individuals showing signs of carrying the burdened flag.