EXCLUSIVE: Police officer nabbed campaigning for NRM while in uniform 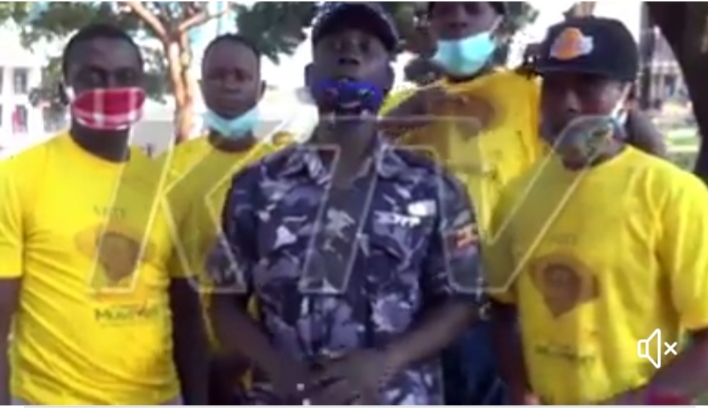 A footage of a yet to be identified police officer violating his code of conduct by overtly participating in politics has left many Ugandan in total dismay. In the video, the police officer with the backing of four individuals donned in yellow shirts inscribed with NRM wordings, is seen trying to mobilize support for the incumbent regime. The officer confesses that he appears in the footage to add efforts to a pro-NRM song in which he has a scene to act. “I am happily here to participate in the NRM song. We have to show Ugandans that Museveni has really worked,” the officer sobs.

He further urges the opposition politicians to simply back out of the struggle and embrace the unending leadership of Yoweri Museveni. “You have to sit down with the old man and work together because he is going no where. He has built roads, hospitals, stabilized the economy and availed peace so there is nothing you can negotiate about,” the police officer says. “Museveni is the right choice for Uganda. Opposing him is just a wastage of time. If he appears on the ballot, we must all vote for him” he adds.

As the footage shockingly gains more audience, the National Unity Platform party through its Facebook issued a condemnation statement on the officer.

“As security forces continue to harass the activities of opposition political leaders together with their supporters with the latest case being the unlawful impediment of Hon Kyagulanyi by the Uganda police when he was supposed to appear on BCU radio on Saturday last week, it’s increasingly becoming more difficult to draw a line between the security forces [which are supposed to exhibit non partisanship practices] and the dictatorship as with no shame, a police officer is recorded campaigning and mobilizing on behalf of the Museveni regime.
The men and women in uniform should be reminded that they are servants of the people and not their tormentors,” NUP writes on Facebook.

The Uganda Police Force seems to be the most underpaid in the entire East African region. Some police officers earn as low as $55 (UGX 180,000) which bars them from ably supporting the education of their own children. The housing facility in barracks like Nsambya, Naguru is in dilapidation with the officers residing in Idi Amin government built structures. In fact due to the congestion in the barracks, the IGP issued an order to all police officers to evict their 18 year old children from the police barracks premises.

By the time of filing this report, police had not yet reacted to the conduct of their unruly partisan officer despite the fact the police manual bars serving officers from participating in active politics.