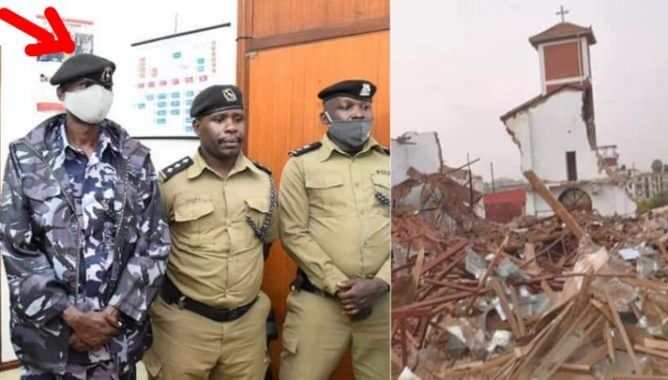 Police have intensified the hunt for the Assistant Superintendent of Police, Isabirye Kaloli who on Thursday escaped from custody where he has since Monday been detained pending investigations into his role in the demolition of St. Peter’s church, Ndeeba.

Isabirye, has been the commander of the Field Force Unit (FFU) in the Kampala Metropolitan South. Although the Kampala Metropolitan police spokesperson, Patrick Onyango has not yet commented on the matter as the institution is trying to conceal it from the public, a source at the Railway police station approved Isabirye’s escape in a phone engagement with our reporter. “It is true, ASP Isabirye is at large. We are doing all in our capacity to capture him,” the officer said. “We have alerted all police units across Kampala and Wakiso. We are sure he will be captured before the weekend,” he adds.

A probe into how Isabirye escaped from custody indicates that on Wednesday night, he bribed one of the junior officers with shs 20,000 and asked to be offered some 30 mins of a phone call with his relatives. “He tricked his juniors that he was to receive a private call and badly needed his phone to communicate with relatives. He was granted the phone and asked for privacy,” says a police officer identified as Afande Sam. “The police guards waited for over 30 minutes and Isabirye was not coming back,” adds Afande Sam.

Becoming more suspicious, the officers went to the police station backyard only to find Isabirye was a free man with untraceable whereabouts. “The guard called his fellow officers and moved all over the police station searching for him in vain. They even moved metres away from the station but Isabirye was no where to be seen,” narrates Afande Sam. The following morning, a search at his home was instituted by police and still ASP Isabirye was nowhere. “The guards reported to the police headquarters. His home was searched but he was nowhere,” he further revealed.