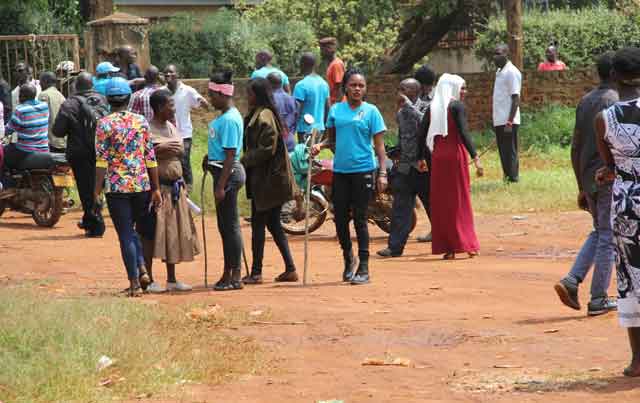 Chaos and rampage was the order of the day in Jinja city after rowdy members of the opposition Forum for Democratic Change party failed to agree on the candidate to carry their flag for Mayor.

It is said that supporters of the incumbent Southern Division Mayor of Jinja City, Mubarak Kirunda plotted to sabotage the process after realising their strongman would be trounced by William Ebusa in a free and fair election. At exactly noon, supporters loyal to Mr. Kirunda broke into Jinja city hall holding whips and started vandalising party electoral gadgets and intimidating supporters of the rival candidates. The noise stunned into chaos and supporters of the wrangling sides exchanged blows till police rushed in to save the situation.

For the first time as Uganda heads to the general elections, the FDC party stands to be the most unprepared after failing to get flag bearers for several positions at different elective levels. The party had banked on the idea of fronting their perennial sole candidate, the person of Dr. Kizza Besigye who this time round maintains he won’t contest. The party is entangled in a leadership vacuum and haunted by the past memories of holding grip and priding as the leading opposition party with 36 elected legislators. Today the story has changed with the FDC losing legislators to different parties.

So far 9 of the 36 have defected to Mugisha Muntu’s Alliance for National Transformation party with the latest being Kasese woman MP, Winnie Kiiza and Paul Mwiru while Bernard Atiku joined NRM and Acholi strongman Odonga Otto finally joining UEP. For two consecutive years since 2018, the FDC has been begging Rtd. Col. Dr. Kizza Besigye to carry its flag at presidential level but the man appears to be resigned and embraceful of the choice Ugandans have taken in the National Unity Platform party president, Robert Kyagulanyi Ssentamu. Just yesterday, a trio of FDC leaning legislators; Betty Nambooze, Moses Kasibante and Allan Ssewanyana joined Bobi’s NUP leaving their People’s Government in tatters. The FDC stubbornly doesn’t want to concede to the fact that they do not have the person to walk in the shadows of Besigye. Ironically, that person is Robert Kyagulanyi Ssentamu who appears well set to lock horns with NRM’s Yoweri Museveni.