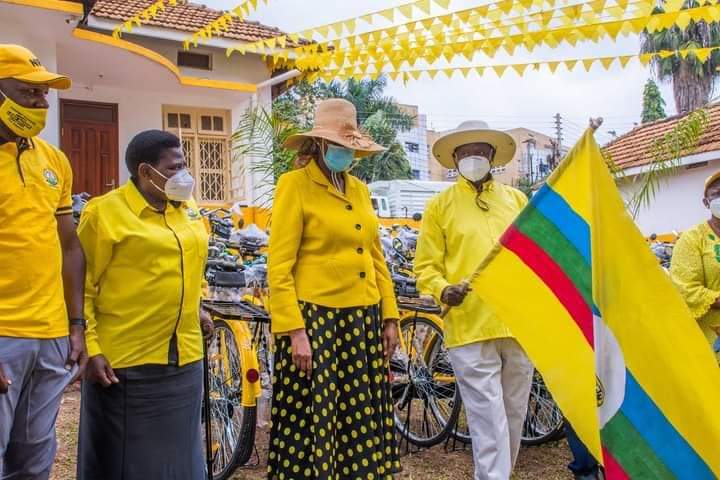 The incumbent National Resistance Movement party under the patronage of its chairman and lifetime candidate, Yoweri Kaguta Museveni has shockingly channelled and incorporated the $491.5 IMF million loan into its campaign ahead of the 2021 general elections.

Earlier today, part of the IMF COVID-19 consignment has been used to procure thousands of bicycles for the NRM party mobilizers who are to hunt for Museveni’s votes across all the 70,000 villages in Uganda. “These bicycles have been bought using the covid loan. Uganda is likely to head to one of the worst financial crises ever,” warns a source at the NRM secretariat.

Another well placed source in the NRM party treasury office says the president, Museveni sat with Rosemary Namayanja and the secretary general, Kasule Lumumba on Friday night at State house Nakasero. In the meeting, the leaders expressed their discontent with the recent European Union ambassadors’ meeting with the NUP/PP leader, Robert Kyagulanyi Ssentamu. A furious Museveni was tipped that the EU delegation had pledged to boost the campaign of the NUP/PP leaders. Angry and unhappy with the idea, Museveni suggested that they use part of the IMf COVID-19 loan to boost the campaign of all NRM candidates something that they all nodded positively to. In the deal, the party has budgeted to register mobile phone numbers for all Ugandans with valid votability. Anonymous phone calls will hit all Ugandan mobile users and a UGX 10,000 amount will be directly deposited to each individual who will accept to vote for NRM.

On May, 6 2020 as the Government of Uganda was struggling to procure the personal protective equipment for the medical workers which evidently insufficient, the International Monetary Fund resolved to disburse a $491.5 million loan to rescue the struggling East African economy to cater for all her urgent necessities. It was the resolve of the IMF board to issue emergency financial assistance to low income countries.

In a press statement from IMF, the board stated that the loan was to, ‘help alleviate the impact of COVID-19 pandemic’ and that Uganda had requested an urgent assistance of $491.5 million, an equivalent to 100% of its quota under the IMF’s RCF’. In one of the terms of the loan was that it was a zero interest rate loan, with a grace period of five and a half years, an a 10 year maturity.