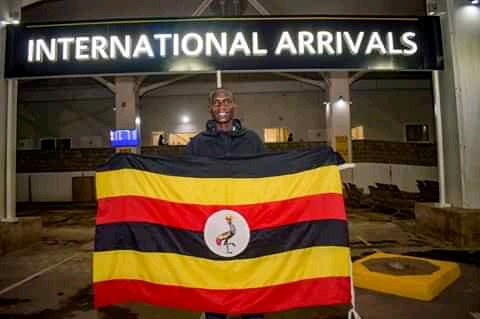 Joshua Cheptegei who stunned the globe after breaking a 16-year-old record at the Diamond League in Monaco is back home. He arrived at the Jomo Kenyatta International Airport in Nairobi, Kenya at 3am aboard a Turkish Airlines flight on Sunday.

Cheptegei was accompanied by fellow athletes Stephen Kissa, Halima Nakaayi and Winnie Nanyondo who also participated in the Diamond League.

Upon arrival, Joshua Cheptegei conveyed a sincere message of gratitude to the officials of the Uganda High Commission for the warm reception that was accorded to him and the entire Ugandan team.

The Athletes immediately departed the Jomo Kenyatta International Airport at 3:45am en route to Uganda, according to the foreign affairs ministry.

They were escorted to the Malaba Border by the Uganda High Commission officials and the Kenyan Diplomatic Police Escorts.  The team arrived at the Malaba border at around 11am and they were received by the Ministry of Education and Sports.