EXCLUSIVE: FDC set to smuggle Besigye back to the ballot 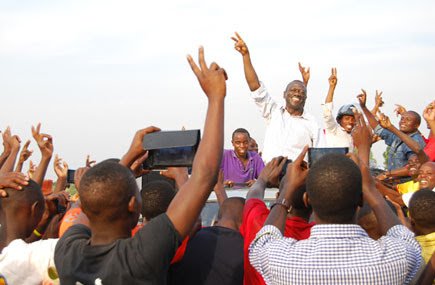 Preparations to nominate four time presidential candidate, Rtd. Col. Dr. Kizza Besigye are in high gear at the opposition Forum for Democratic Change party headquarters in Najjanankumbi according to reports we are receiving from trusted sources.

Despite the fact that Besigye stubbornly remains hesitant on making a fifth presidential attempt, we have been tipped by inside sources that the party president, Patrick Amuriat is to lead a delegation of hired youths to Kasangati who are to ‘forcefully’ drag Besigye out of his premises and take him to Najjanankumbi and have him nominated in a style similar to the 2016 event when FDC youths stormed the TDA headquarters and carried away Besigye and took him for nominations.

The mood at Entebbe road already depicts something unusual is being planned at Najjanankumbi. Our reporter who scrolled around Entebbe road encountered pinned posters of Dr. Besigye stuck onto the walls of Najjanankumbi FDC party headquarters moreover inscribed with the years 2021-2026.

The FDC resolve to return Dr. Besigye follows the persistent rejections by city Lord Mayor Erias Lukwago and Bugisu strongman, Nandala Mafabi who declined to lock horns with Bobi Wine who appears to be very popular than they are. “Lukwago opted to stay in the Lord Mayor position, Mafabi fears competing with Bobi Wine so the only option still is Besigye,” says a source in the FDC CEC. “Party leaders disputed the idea of rallying behind Bobi who is a NUP candidate. Many said it would be shameful if FDC does not front a candidate,” the source further intimates.

Although Besigye has not yet officially been unveiled as the FDC presidential flag bearer for a fifth time in a row, odds are high that he will give it a ‘final’ shot. The FDC party unlike other opposition denominations like the DP cannot imagine supporting a candidate from a different divide.