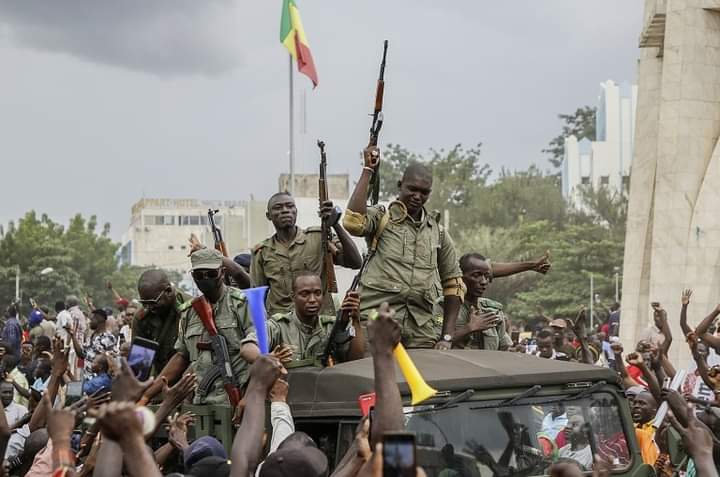 The masterminds of Mali’s coup that ousted President Ibrahim Keïta on Tuesday include the deputy head of a military camp and a french-trained general. The BBC Monitoring has profiled three high-ranking military leaders thought to have played key roles in the coup.

1 – Col Malick Diaw
He is the deputy head of the Kati camp where the mutiny started.
There is very little information about him apart from reports that he recently returned from training in Russia.
He stood next to Air Force deputy chief of staff Col-Maj Ismael Wagué who read a statement on Wednesday on behalf of the junta to announce the military takeover.
“Colonel Diaw is believed to be the leader of the mutiny at Kati camp, 15km [nine miles] from Bamakoi. He is said to have asked the president of the republic to leave power before 02:00 pm [1400GMT],” a tweet about him said.

2- Col Sadio Camara
Col Camara is a former director of the Kati military academy.
Mali Tribune website reported that he was born in 1979 in Kati, in Mali’s southern Koulikoro region.
He graduated from the Koulikoro military academy (EMIA) with top honours. He was then deployed to northern Mali where he served under Gen El Hadj Gamou until 2012.
Col Camara later became the director of Kati military academy, a position he held until January 2020 when he went to Russia for military training.
Mali Tribune said that he returned to Bamako earlier this month to take his one-month leave.
“Col Camara was appreciated by everyone where he worked and is respected and adored by all his subordinates. To them, he represents righteousness, seriousness and determination,” the website said.

General Cheick Fanta Mady Dembele is the director general of the Alioune Blondin Beye peacekeeping Institution. He was promoted to brigadier general in May 2018 and assumed leadership of the peacekeeping institution in December 2018.
Prior to his appointment to the institution, Gen Dembele was in charge of conflict management and strategic planning at the African Union Peace and Security Commission based in Addis Ababa, Ethiopia.
Gen Dembele is a graduate of Saint-Cyr military academy in France. He also graduated from the General Staff College of Koulikoro, Mali. He holds a degree in history from the University of Paris I Panthéon-Sorbonne.
He also has a master’s degree in civil engineering and graduated from the German Federal Army University in Munich.