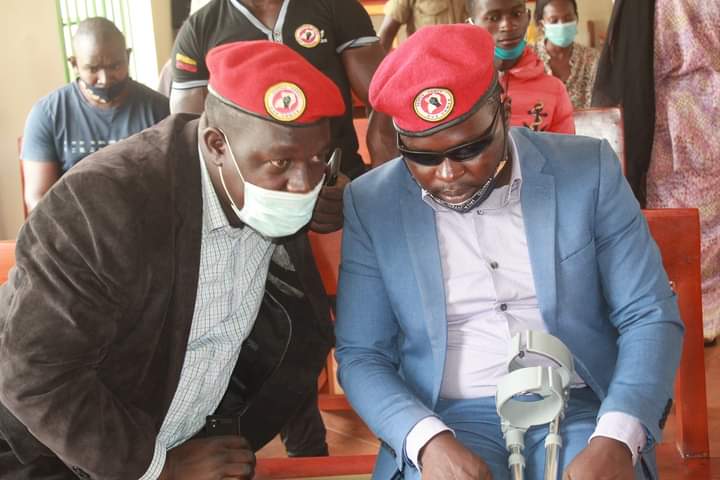 The security officers who allegedly indulged in the torture meted out on the Mityana municipality legislator, Zaake Francis Butebi have all absconded court in protest of being tried in Mityana.

The four detectives; Bob Kagarura, Alex Mwiine, Twesigye Hamdan and Isha Ntumwa say they cannot appear for trial in the Mityana court because they are too busy handling ‘national duties’.

“I wish to express my dissatisfaction with certain circumstances surrounding the ongoing criminal case that I initiated in Mityana Court against Police officers led by RPC Bob Kagarura, DPC Mwine Alex Mukono, Twesigye Hamdan and others who tortured me. These criminals were supposed to take plea on 5th August but they did not appear in Court,” reads part of Zaake’s statement.

However, the four busy security officers opted to delegate a lawyer to represent them. “Instead, they sent a lawyer who arrogantly informed Court that they had filed an Application in Mubende Court to protest against their prosecution in Mityana Court, and so they could not attend,” reads another excerpt of Zaake’s statement.

The said officers seem to hold a conviction that they are above court trial as highlighted in another narrative sourced from Zaake’s statement. “Today, the same criminals were again supposed to appear in Court to defend themselves but instead its their lawyer Tumwebaze Erias who appeared and informed Court that his clients had not turned up because they had received information that the Presiding Magistrate would not attend Court today yet my lawyers never got similar information. On two different occasions these officers have defied Court Summons but it’s business as usual for them!,” explains Zaake.

Zaake further exclaims that there is a conspiracy between the prosecuted officers and court officials who aim at failing and suppressing the case. “In the meantime, I have received credible information about a conspiracy between key security officers in the District, the suspects, and some Court officials. Apparently, the Mityana District Security Committee has been meeting on a regular basis to discuss how to fail the case I filed against the police officers. I am told that these meetings have been regularly attended by some of the police officers I sued, as well as some Court officials from the Chief Magistrates Court of Mityana. I am worried that even this time I will be deliberately denied justice!,” Zaake further reveals.