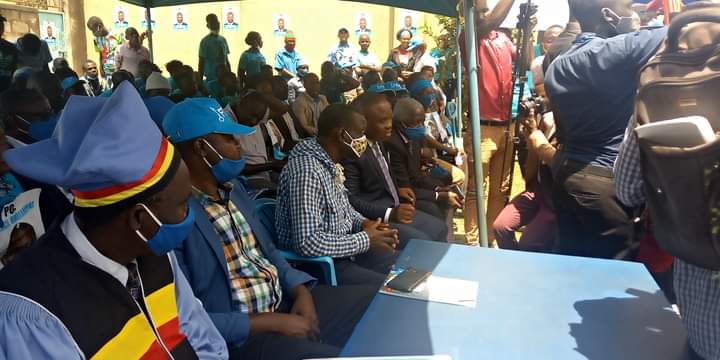 The political atmosphere is still very tense at the FDC party headquarters in Najjanankumbi, as the four time presidential contender, Rtd. Col. Dr. Kizza Besigye gives a farewell speech to his supporters.

Earlier on, Dr. Besigye was expected to collect nominations for the fifth time but he adamantly declined, inviting his supporters to explode into chaos. Many tried to even physically assault him and intercepted his speech asking him to pick nominations prior to making the address. After minutes of the pandemonium, the situation later calmed and Besigye proceeded with his speech.

In his lengthy submission, Dr. Besigye has urged Ugandans not to give up on the struggle because it is not a one man revolution but rather all the oppressed. “We’ve worked with other members who are not FDC. I rubbed shoulders with the Lord Mayor Erias Lukwago, he was not FDC. The struggle needs every oppressed person to be part, whether one has a party or not,” Besigye said. “Ugandans must know that the country is not in their hands. It is in the hands of gunmen,” Besigye further said.

He also pronounces Museveni’s government to be the most repressive in the history of Uganda. “Never in history have we had pundits, looters, and murderers like those led by Museveni,” Besigye said. “Today, in Kasese we still have mass graves of people killed by the regime,” he added.

The event is still ongoing and Besigye is expected to make his withdrawal statements any time soon, we shall keep you posted.