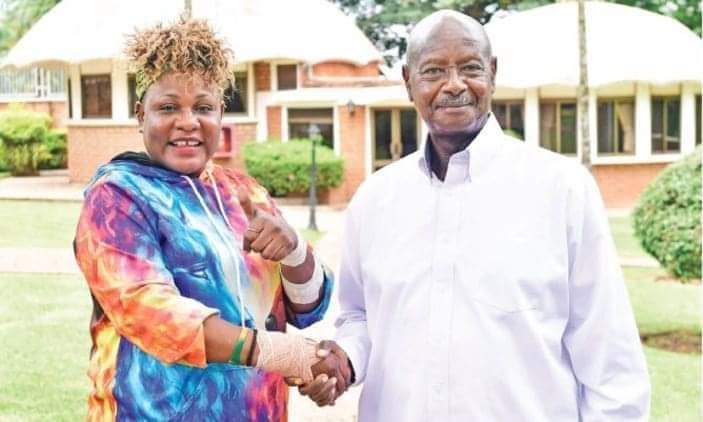 While many have wondered why Museveni’s diction is transiting to being radical and abusive with terms like ‘pigs, idiots, and fools’ dominating his addresses, it turns out that the ageing president is now getting used to the life of the new company in Full Figure. Just this evening, Museveni has praised his cyber war mercenary, Jennifer Nakagubi alias Full Figure for doing what he pronounced as a commendable role for the NRM party.

According to Museveni, Full Figure’s unbecoming lewd, vulgar, radical and obscene behaviour on the dissent is a combative tool the NRM has long awaited to have on board. Speaking at today’s widely televised address at State house, Museveni urged the NRM secretariat to tolerate and accomodate the illiterate like Full Figure who is doing a commendable job of keeping on her phone keyboard 24/7 pelting insults at People Power supporters and presidential hopeful, Robert Kyagulanyi Ssentamu alias Bobi Wine. “I have met people like Full Figure, Buchaman. I demand that the NRM leaders avoid politics of elitism. In Luweero, when we were fighting, we were with the people,” Museveni said.

After hearing Museveni’s remarks, Full Figure, like a child who’s spotted a lollipop took back to her keyboard to ululate and jubilate that moment of being granted such an honour. “Ever since I brought Full Figure in Kampala the numbers have changed NRM won with a margin in youth elections. Muzei said few minutes back while addressing CEC at State House Uganda,” Full Figure wrote on her timeline.