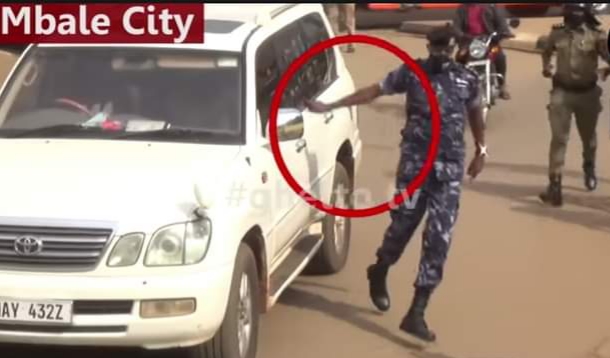 As the Kyadondo East member parliament, NUP Party President Robert Kyagulanyi Ssentamu alias Bobi Wine was returning from Mbale, the men in Uniform fired live ammunitions to disperse people who had come across the road to wave at Bobi Wine and as a way of showing solidarity. ASP Abraham Asiimwe is seen spraying a liquid substance at Bobi Wine’s vehicle in a tragedy manner.

“Police Officer ASP Asimwe Abraham actually came to my car window and sprayed pepper spray direct into my eyes as he cursed me. I wondered the kind of police we have!” Bobi Wine narrated.

Bobi Wine sued, the Mbale police RPC Wesely Nganizi, Mbale DPC Fred Ahimbisibwe and the Mbale CPS OC Kato Arafat whom he also wants to pay punitive damages for the high handedness they exhibited on Saturday , when they fired tear gas at him and his supporters.

Kyagulanyi says the act by police in blocking him to appear on a radio talk show in Mbale yet other politicians were given access to the same radio that day is discriminatory and an infringement to his Constitutional rights of free speech and expression.

He also seeks an injunction to permanently stop police from prohibiting him to speak on other radio /TV station in the county.