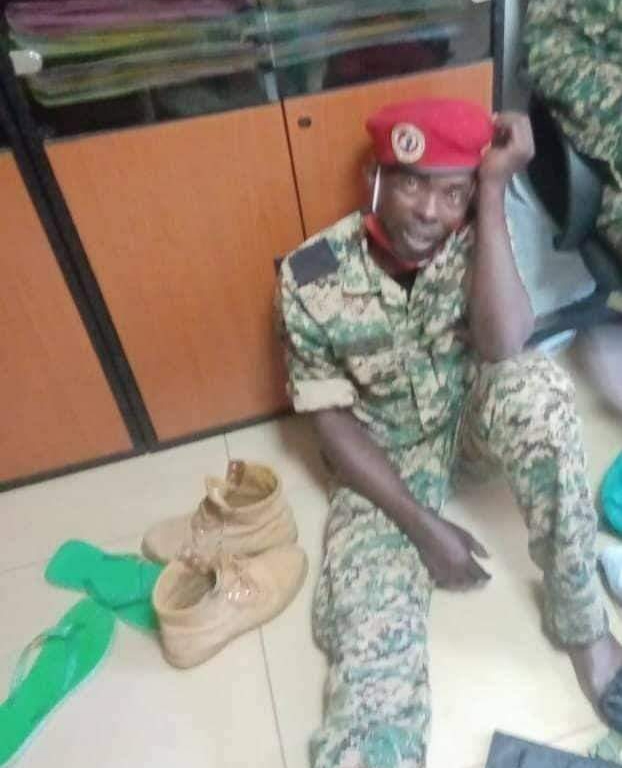 The Uganda People’s Defence Forces have finally cracked down on the army deserter who on Tuesday defected to Bobi Wine’s National Unity Platform party. The soldier’s images dominated social media and became a subject of debate with many appreciating it as a symbol that the army will join the people’s struggle just like in other countries.

The culprit, Private Justus Turyatunga is apparently being detained at Mbuya military barracks pending further investigations. Although the UPDF have not yet explained the arrest of this gentleman, we have reliably learnt that he is to be martialed in the army court either today or tomorrow and the charges are mainly the breach of army code of conduct which prohibits active participation in partisan politics. “Pte. Turyatunga made a mistake to appear at a political party function in a full army combat. It portrayed our army as a partisan force, contrary to the 2005 UPDF act which bars a serving soldier from indulging in politics,” says Cpl. Okello Walter. “He would do his politics in a much sober manner. He should have put off the uniform at least,” he adds.

MP Zaake reacts to the arrest;

Now that you finally have him in your detention, you may break his bones tonight but you won’t break his spirit. Like Nelson Mandela said, When a man is denied the right to live the life he believes in, he has no choice but to become an outlaw”. If we were living in ordinary times, I would be condemning Pte. Justus Turyatunga for having involved himself in partisan politics. But these aren’t ordinary times for our dear motherland! So I will reserve the condemnation for those who are torturing him now. I am told that he is being detained in Mbuya Military Barracks.