The Rt. Hon. Speaker of Parliament, Rebecca Alitwala Kadaga has bitterly resurrected with bare knuckle jabs at her political nemesis, Ruth Nankabirwa whom she believes could have been the backbone of Minister Persis Namuganza’s candidacy in the just concluded National Central Executive Committee elections which were held yesterday.

Kadaga thumped Namuganza in one of the most competitive polls she’s been in since she started serving the party. She edged the Minister by 2,833 votes having scooped 6,776 votes unlike Namuganza who obtained 3,943. Upon her victory as the 2nd Vice Chairperson of the NRM’s top organ, the Central Executive Committee (CEC), Kadaga has opened up on her next take for the masterminds behind Namuganza’s bold decision to challenge her all the way to the ballot. 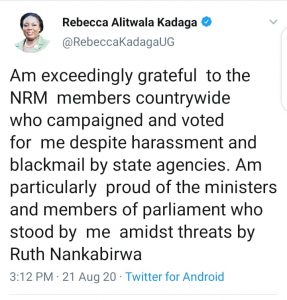 Expressing herself in a tweet published today, Kadaga thanked the NRM delegates for standing with her through this trying political moment and went ahead to caution her rivals especially Nankabirwa for waging a conflict she may not sustain. “Am exceedingly grateful to the NRM members countrywide who campaigned and voted for me despite harassment and blackmail by state agencies. Am particularly proud of the ministers and members of parliament who stood by me amidst threats by Ruth Nankabirwa,” Kadaga tweeted.

In an audio that leaked from NRM WhatsApp platforms, Government Chief Whip, Ruth Nankabirwa is heard castigating and decampaigning Kadaga in favour of Namuganza. Sources say the fued is prolonged and ambitious as Nankabirwa reportedly seeks to take over speakership of the eleventh parliament, according to remarks by popular media commentator, Joseph Tamale Mirundi.