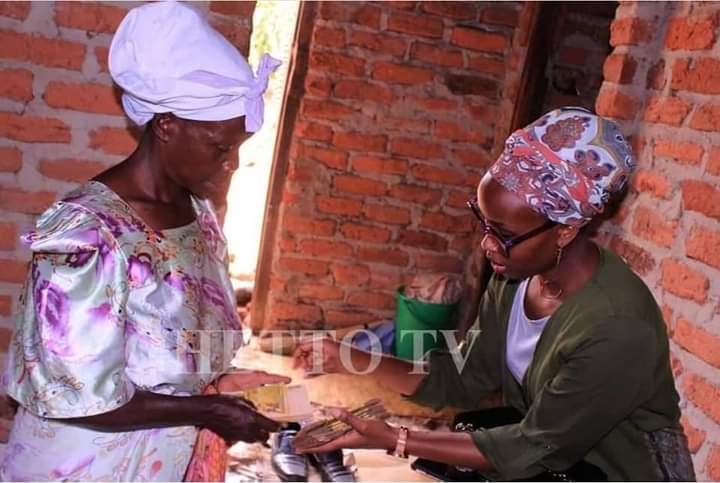 Barbra Ithungo, the wife to presidential candidate, Robert Kyagulanyi Ssentamu alias Bobi Wine has today visited the family of the slain Yasin Kawuuma who on August 13, 2018 was gruesomely shot and killed by the SFC troops during the Arua byelection.

Barbie’s impromptu visit follows Museveni’s Friday insensitive comments glorifying the murderous actions of his men who shot and killed Yasin. A heartbroken Barbie first shared the insensitive footage of Mr. Museveni heaping praises at Yasin’s murderers before she added another post mentioning the name of the deceased followed by an emoji of tears.

Barbie later opted to visit and share the grief with the widows and 10 children left behind by the deceased Yasin. She handed over a cash disbursement and other domestic necessities to help the family in this trying moment.

Important to note is the fact that the same Museveni on September 24, 2018 out of pressure delegated his then ‘Minister for condolences’, Catherine Kusasira to deliver UGX 20m to the deceased’s family. This act triggered a controversial public outrage contesting the ironical far fetched charity as MP Zaake Francis, a survivor of the Arua byelection violence frequently notes, “Museveni is the person who will kill you and then give the family condolences money to appear like he is an angel.” It therefore appeared unrealistic for the man who ordered for the murder of the the family bread winner to shamelessly be the bread provider. It is of no wonder that the family of the late Yasin rejected Museveni cash offer and instead demanded for justice to prevail. To date, no SFC personnel has ever been apprehended to account for the Arua bloodshed. They remain at large courtesy of the immunity provided by the Commander in chief himself, Gen. Yoweri Kaguta Museveni.