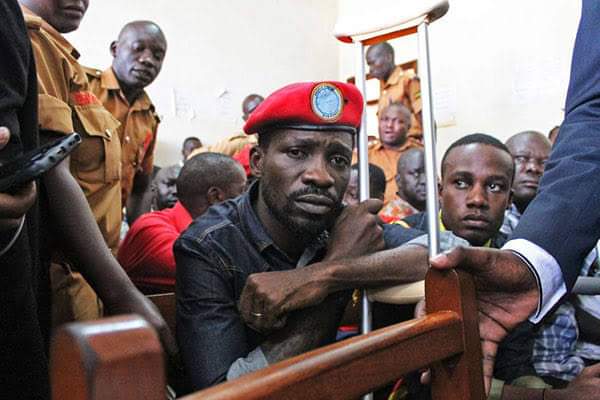 National Unity Platform Executive secretary and composed city lawyer, David Lewis Rubongoya has just reminisced the 2018 torture that was afflicted on the Kyadondo East legislator, Robert Kyagulanyi Ssentamu alias Bobi Wine. In a lengthy narrative, the lawyer recounts his first hand experience with what he encountered at the Makindye military facility where the political prisoner, Kyagulanyi had been detained. Below is the excerpted report without any alteration;

ON ARUA & THE MUSEVENI STATEMENTS!

In August 2018, I was one of the very few people who saw Hon. Kyagulanyi in Makindye Military Prison, three days after he was tortured. We waited for hours upon hours and after we had gotten clearance from ‘above’, a few family members, lawyers, Kampala Lord Mayor and officials from the Uganda Human Rights Commission were allowed in. I had never been checked as much, all my life. We went through three check-points. Our pens were replaced, sun-glasses were taken away, and each button on our garments was thoroughly scrutinised, just in case it was a camera.

The small house in which he was, was surrounded by mean looking military men, holding big guns. You would think they were guarding a war criminal.

On getting into the room, we sat with bated breath. No one spoke a word. We waited. The silence. The suspense.

About 20 minutes later, Hon. Kyagulanyi was brought in. He was being carried by three soldiers. He was dressed in a red sleeveless shirt, and red shorts ordinarily worn by prisoners at the detention facility, written on MP (for Military Police).

He could hardly see. Even when he tried to open his eyes, you could see that one of the eyes was so red and swollen. There was a swollen mark cutting through the eye and the nose. He was writhing in pain. His entire face was swollen. Fresh marks of blood were visible on his face and one of the ears. A little later on, he showed us his back and mehn, the fresh signs of lashes crisscrossed his entire back. I kept asking myself what he looked like two days earlier, when he was in this state on the third day.

As soon as he was brought into the room, there was a great wail. No one in that room could stand the sight of this celebrity Member of Parliament who now looked like a common rouge- beaten by a mob for stealing a phone on the street. Everyone, including officials from the Uganda Human Rights Commission were crying, some loudly and others silently- holding wet handkerchiefs close to their faces.

He could not sit. One of his brothers tried to hug him and he slipped, almost falling down. He let out a very loud, painful groan. And the people cried again. It was a very dark day. I could not find sleep for the following days.

Because of the pain he was undergoing, no one could immediately gather the courage to begin the conversation. All of us sat there, and watched him as he struggled to breath. It was after about 30 minutes that he started narrating what had happened to him. With great difficulty, he narrated unbelievable things which they had done to him!

Meanwhile, there were senior soldiers listening in to every word he said. At some point, he had to lie that they were all taking good care of him so that when we left, they would not torture him again. At that point, they were all addressing him as Honorable! They had hurriedly prepared sodas, bananas and bread, and placed it in the middle of the room, to give an impression of civility.

They even asked his wife to bring a suit for him the following day, so that he appears presentable on his next court appearance! Meanwhile, Hon. Kyagulanyi told us how much he was being injected with steroids every few hours to reduce the swelling ahead of his next court appearance. He was taken to Kampala Imagining Centre in the dead of the night, so that no one had chance to get a glimpse of him in that state.

It would be a few more days of struggle- military detention, blockades, court appearances, presenting machine guns, hospitalization, blockade at the airport and the eventual flying out for treatment. All this while, President President Museveni wrote lengthy letters daily, saying that Bobi Wine was in good health, and had not been tortured!

Last night when I saw him saying that Kyagulanyi was beaten properly, these memories came back to me. The Arua episode was like a very terrifying nightmare which you would rather forget. Unfortunately, the words by the head of state – mocking and downplaying the suffering I saw with my eyes, invoked pain, anger and sadness. I feel sorry for those who believe in the vision of the crop of people who preside over our country.

Friends, of all things we should look for in leaders, let’s look for empathy. A leader who cannot accept responsibility for his actions and has no sense of empathy deserves no place in leadership in the 21st century. A leader who takes pleasure in the torture and brutal treatment of his political opponents is a sad spectacle. God grant, that we shall soon see a new day in the leadership of our country.