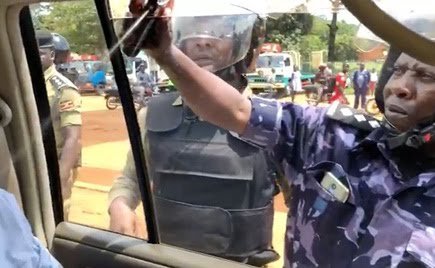 The name Rashid Agero is very familiar to Uganda’s opposition politicians who have been in the arena since the return of multi-party politics in 2006. Rashid, aged 59, apparently heads the Field Force Unit (a police wing that quells protests) at the rank of Senior Superintendent of Police, a position he inherited from the now calm, Afande Sam Omala.

Our sources have established that SSP Agero is among the senior police bosses implicated in the razed Ndeeba church scandal. It is alleged that he abetted the demolition when he ordered and directed both the Kampala South FFU head, Isabirye Kaloli and Katwe DPC, David Epedu to provide security and assistance to the hired goons who brought down the 40 year old Anglican structure. Although he remains unmentioned in the mainstream media, it is confirmed that SSP Agero and several others were last week remanded to Kitalya prison pending further investigation into their role in the razing of the church.

Who is SSP Agero

The name Rashid Agero is familiar to Ugandans who have followed some of the pillars in the opposition struggle. In the year 2006 in the peak days of the Democratic Party, Agero came into the spotlight following his unprofessional conduct when he put a pistol on the head of the now deceased John Ssebaana Kizito who led a DP delegation for a prayer at Christ the King church in Kampala. Although Agero acted unprofessionally, it was absolutely impossible for a force led by the emperor of notoriety, Gen. Kale Kayihura to apprehend him for his actions. Agero was instead promoted to bigger ranks and redeployed for other missions.

In 2011, Agero again reappeared in the walk to work show down. He was very radical on the loyalists of the Forum for Democratic Change party then led by Dr. Kizza Besigye as the party president. Agero brutally battered Besigye supporters off the streets of Kampala.

His feud with Besigye is what popularised him in the police force. Some sources say, Agero just enjoyed tormenting Besigye and would at times confess to his juniors about how he ‘misses protests’. In the aftermath of the 2016 general elections, Agero asked the IGP, Kayihura to deploy him at Besigye’s Kasangati residence so he can enforce the house arrest. Agero successfully played this task and Besigye was held captive for three consecutive months till Museveni took oath as president and the fire ceased.

On December 26, 2018, Agero led a team of police officers who violently dispersed musician-cum politician Robert Kyagulanyi, alias Bobi Wine fans who had gathered for a concert at One love beach Busabala. Bobi Wine was eventually arrested and taken to his home in Magere, Kasangati and put under house confinement.

In November 2019, Agero again resurfaced in Bweyogerere where he dispersed FDC supporters who were gathering for a party delegates conference. Agero commanded the direct water canon incident where Dr. Besigye was nearly sprayed out of his vehicle. In a footage that circulated on social media, Agero was seen smashing the windscreen of Besigye’s car with aid of his rifle and pepper sprayed into the vehicle before he ordered his juniors to subdue him. Besigye was then arrested and taken to Naggalama police station where he was freed on bond that very night.