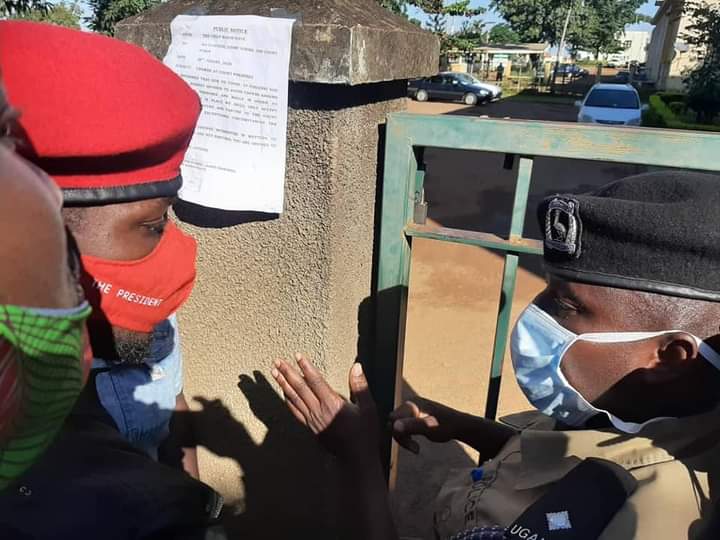 National Unity Platform party presidential candidate, Robert Kyagulanyi Ssentamu alias Bobi Wine has strongly condemned the escalating violence tendencies exhibited by the police who have habitually made it a hobby to torment Ugandans. Apparently, chaos are still ongoing with police using live ammunition and teargas to disperse NUP supporters. Injuries and arrests have been registered as we shall divulge in our next publication.

Bobi explains his ordeal through a post he published on his Facebook page this morning where he states;

Travelled throughout the night to attend court in Mbale, where we are suing the Attorney General, the RPC, DPC and other security officers for blocking us from accessing a radio station in Mbale and using excessive force against our people.

Unfortunately, yet again, the police deployed heavily and prevented us from accessing court for several hours until the people gathered in multitudes. As soon as a few of us were let in, teargas and live bullets were yet again fired to disperse the people- others were severely injured.

In a very unfortunate twist of events, the Magistrate declined to hear the matter and adjourned it sine die, ostensibly until the COVID situation normalises. We objected to this because firstly, this is a human rights case which must be heard and determined expeditiously. Secondly, the same court has been having hearings with even more people in there. In fact, as soon as I left the courtroom, another matter came up and the Magistrate heard it in the same chambers with the same number of people present. We are going to invoke some administrative remedies to see that justice is served in this case.

But President Museveni and his men must always be reminded that Ugandan courts are not the alpha and omega. That is why we are in advanced stages of ensuring that these cases are also heard by international courts and tribunals.

WE ARE FIGHTING FOR FREEDOM