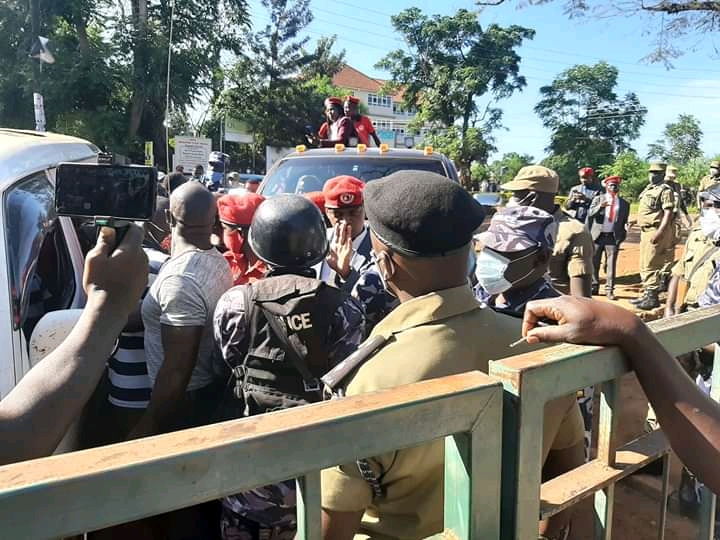 Police have spent their greatest fraction of Wednesday battling with National Unity Platform party supporters who were following presidential hopeful, Robert Kyagulanyi Ssentamu alias Bobi Wine to and from court.

In the morning hours, as police attempted to disperse a crowd that was swelling around the court premises, fragments of stray bullet hit a young man’s eye and damaged it. He was rushed away to a nearby clinic as he wailed in deep pain. Moments after the first blood spill, Bobi Wine snaked out of his vehicle to ask police officers why they were acting reckless. His inquest fell on deaf ears as police provocatively fired at his supporters and even went ahead to make several arrests. Bobi Wine could not be arrested since he was to have a court session. He was allowed in with just a handful of his legal team while his followers were asked to vacate and those who defied got arrested. In the process, People Power activists; Kataba Ali, Matovu John and Muduwa Scovia were arrested and we have since learnt that they’ve been arraigned before Mbale magistrates court for trial on trumped charges of inciting violence and disobeying lawful orders.

While Bobi Wine and his entourage were returning back to Kampala, police continued to chase after them with plumes of teargas and live bullets to scare away crowds. The driving speed was at breakneck as the police patrol tried to dig through Bobi’s convoy and stop him from proceeding to Kampala. Our multimedia journalist who streamed the scuffle live on Ekyooto Facebook live captured police trying to order Bobi to stop and have him arrested. Consequently, a stray bullet hit the chin of Bobi’s aide known as Mugerwa Mark alias Ghetto Speaker. He collapsed and has since been rushed to a clinic for treatment.

Bobi also says although he evaded arrest, he encountered a barricade in Nakasaja where police tried to intercept him. “On our way from Mbale in Nakasaja just about 2 miles away from my house, police has blocked the entire road and is saying we cannot proceed. SHAME!,” Bobi said in a post published an hour ago (15:00hrs) on his Facebook timeline.