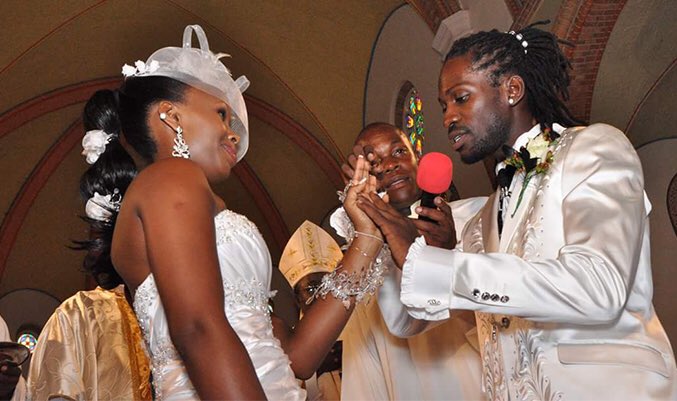 Lwanga commended the couple for setting a good example to the youth.

“What you have done; to come and get married in church, shows that you understand your religion and love it because many people knew you as bayaga (weed smokers). I appeal to the youth and all those who have not yet got married in church to follow suit.” He said.

Lwanga said he had asked Bobi and Barbie to explain the dreadlocks and tattooing each other on their bodies and was satisfied by their explanation. The couple explained to him that tattooing was similar to okutta omokago, a traditional method of expressing tight friendship. The dreadlocks, he added, was just a hairstyle and not a religious symbol.

Among the guests which were present include the Nabagereka (queen of Buganda), Sylvia Nagginda, the Kabaka brother, Prince David Wasajja; Prince Jjunju and several Mengo officials.

Also present were singer Jose Chameleone and his wife Daniela. Chameleon, who had converted to Islam before making a U-turn, did not receive Holy Communion.

Barbie Kyagulanyi has been very pivotal in pushing Bobi Wine’s career straight from his days as an uprising musician to pushing his career as a politician. Her strong influence in Bobi Wine’s life has led very many people to use the hash tag “every man deserves a Barbie”. In the wake of the Bobi’s detention in Gulu, she was unshaken and always stood by his side. To date, Barbie supports the husband in his quest to become the President of the republic. Every youth ought to get themselves a Barbie.