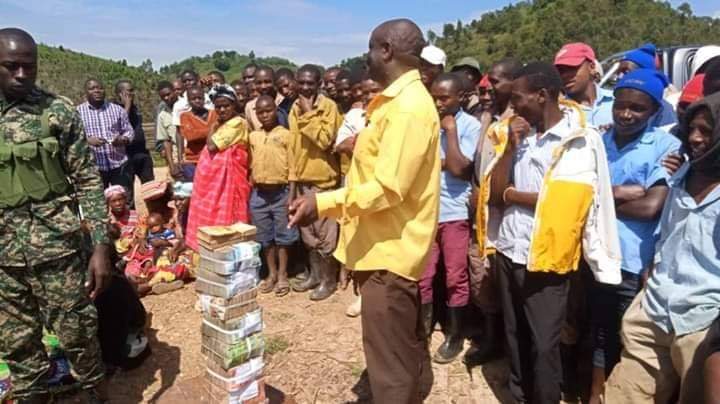 News coming in from Bunyoro region indicates that the Museveni cabinet Minister for Finance, Matia Kasaija is parading millions of shillings to dish out to the desperate impoverished voters.

If one has been wondering why the Minister for Finance, Matia Kasaija in mid-June read wrong budget figures before the floor of parliament, the answer is visible in his current Member of Parliament campaigns for the Buyanja county in Kibaale district.

According to reliable local press reports, Kasaija is embarking on a cash dishing spree in which he habitually displays millions of shillings amidst cheering desperate impoverished voters whom he gives between UGX 5,000-10,000 for every individual potential voter in broad daylight without even observing the Ministry of health standard operating procedures, a norm that NRM politicians have embraced lately.

The 76 year old Bunyoro power broker and NRM mobilizer is said to be one of the wealthiest politicians in the region and possibly the country at large after his indulgence in the budget inflation scandal this very year. Besides, a lot of grants and donations passed through his Ministry on top of the supplementary COVID-19 budget which was also issued through his docket. Pictures of him spending like a ‘Brian White’ sort of socialite have already hit social media and have since gained traction triggering a public backlash.

Hellen Tibamanya, a voter from Bunyoro lashes out at the Minister as she bitterly states, “the money Kasaija is displaying there is enough to set up a health centre which would benefit the community for generations to come but because that’s not their concern, they are busy buying their way in so they completely finish Uganda. NRM you are the biggest curse in Uganda.”

Kyaligonza Annet juxtaposes what Nakaseke South MP Luttamaguzi Ssemakula went through a couple of days back with the freedom and immunity Kasaija is enjoying while campaigning. “To my surprise, I am seeing him being protected by security personnels and his rallies are going on smoothly without interruption by the same security personnels who brutarily arrested Hon. Luttamaguzi and hurriedly remanded him to prison. I am not seeing any covid guidelines being observed!then why not permit free and fair election compaigns??
It’s so sad that these people are not afraid to show their wickedness and oppression to non NRM members.”

The Minister narrowly escaped an audit as he claimed the inflated budget figures were in line with the World Bank and IMF efforts to support Uganda throughout the covid pandemic. “I informed parliament and the country about these resources and also pledged to go back to parliament with proposals on how to spend this money for appropriation,” Kasaija stated in defence of the 2020/21 budget discrepancies.