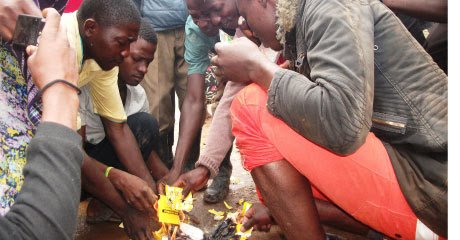 There is looming tension in Ssembabule district ahead of the Friday NRM party primaries following a clash between Shartis Kuteesa (Sam kuteesa’s daughter) and Godfrey Aine Kaguta (Museveni’s brother) over the grip for the flag.

Confusion and tension was triggered when a group of Aine Kaguta loyalists stormed a meeting held by Shartis Kuteesa and went bare knuckles with her supporters. Shartis decries and accuses Aine’s team of superitending fraudulent registration and illegal smuggling of more voters into the yellow register yet the time frame expired several months back.

It is also alleged that the two camps (Aine and Shartis) are using their good state relations and family links to deploy soldiers of the SFC to man their elections. Shartis is favoured by not only being a daughter to Foreign Affairs Minister, Sam Kuteesa who is the retiring incumbent, but also her blood ties (twin sister) with the first son’s wife, Charlotte Muhoozi who is married to Museveni’s son, Gen. Muhoozi Kainerugaba. On the other hand, Aine Kaguta is a blood relative to the NRM chairman, Yoweri Museveni.

Reports say the NRM Sembabule primaries have been marred by electoral violence as the elite SFC soldiers fire at supporters of either camps in a bid to smoothen victories of their bosses. A source says over the weekend, the bloodiest battle ensued when Aine Kaguta in company of his brother, Toyota Kaguta and a fleet of state vehicle and armed forces encountered supporters of Shartis Kuteesa. Bullets were fired to disperse and prevent a possible blood spill. Out of arising fear, Minister Kuteesa has already appealed to the SFC to withdraw from the district and leave the party to conduct its own elections independently. “I have been informed of heavy SFC presence in Ssembabule. I appeal to relevant authorities to withdraw these forces with immediate effect,” Kuteesa said. “I have plan B for this election in case everything goes wrong,” he cautioned.