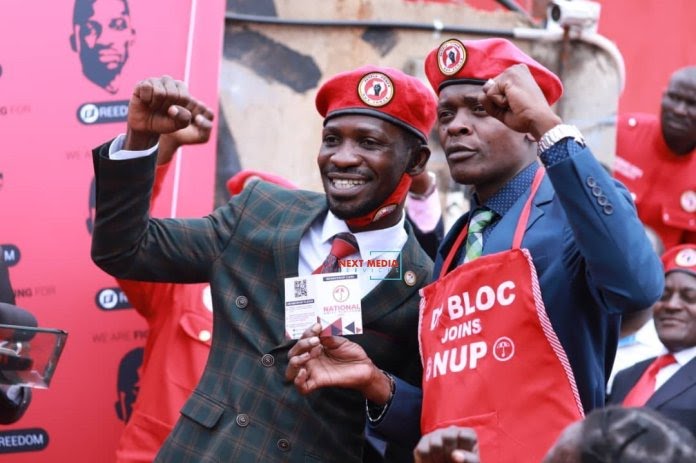 The scuffle broke out at exactly 11:00hrs when the police arrived and deployed heavily at Balintuma road, in Rubaga where Lord Mayor aspirant, Joesph Mayanja alias Dr. Chameleone was to open his campaign and NUP coordination offices. However, police could not let this happen as they stressed he had not adhered to the existing health guidelines on covid.

Tempers boiled amongst his supporters who defied police orders and a scuffle ensued. Police fired teargas and live bullets to disperse Jose Chameleone supporters who were travelling on Boda Bodas to welcome him to the new NUP offices. The musician has sustained a right foot injury and swipes or pressmen injured and baptized with teargas during the violent scuffle. A source privy to the development says Chameleone has been rushed to hospital to nurse his right leg which is oozing blood.

His supporters have vowed not to vacate the Balintuma road offices till their endeared leader turns up. Police is still encamped at Chameleone’s offices to monitor the situation.

Last year, the iconic singer announced that he would be trailing the political steps of his fellow artiste, Robert Kyagulanyi Ssentamu alias Bobi Wine who joined national politics. Chameleone, who formerly was a darling to dictator Yoweri Museveni’s NRM party having sang for him a 2016 campaign hit song titled ‘Tubonga Naawe’ announced that he had officially defected to the Democratic Party. The DP president Nobert Mao welcomed and declared him a game changer who was to even hold the party flag for the Lord Mayor seat. In a twist of events, Chameleone again defected to Bobi Wine’s National Unity Platform party and is apparently lobbying for their endorsement to take on FDC strongman, Erias Lukwago.