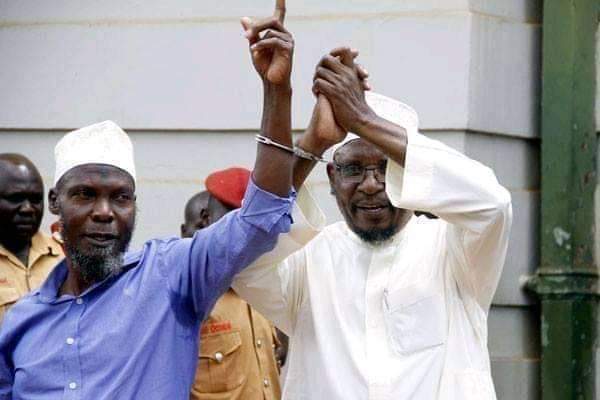 The court of appeal has today quashed the conviction of the Tabliq sect leader, sheikh Yunus Kamoga and five other Muslim clerics who have been facing terrorism charges.

The ruling was delivered after court established that the five were not fairly tried as they were allegedly convicted on baseless grounds despite the state failing to adduce sufficient evidence to implicate them in the said charge, and the murder of Muslim sheikhs.

Yunus Kamoga, Siraje Kawooya, Murta Mudde Bukenya, Fahad Kalungi, Abdul Salam Kayanja and Kassim Mulumba were today set free by the court of appeal. The five were in the year 2017 convicted to a life sentence after being found guilty of terrorism charges.

Three court of appeal Justices led by the new Chief Justice, Alfonse Owiny Dollo have ruled that the prosecution had not proved this case beyond a reasonable doubt because acts of terrorism must have an ingredient of indiscriminateness in them which they have not found in this case.

Speaking about the acquittal, one of the political analysts says this is just a game that Museveni is playing to win back the Muslim fraternity which had already pledged to rally behind the opposition in the looming 2021 polls. “I am not excited about the release of Sheikh Yunus Kamoga and others but I am shedding tears for seeing my motherland Uganda at the brink of disintegration. Ugandans let’s not be gullible.
The court of Appeal has today quashed the conviction of Sheikh Yunus Kamoga and others after spending years in detention, all the efforts to secure for them bail were frustrated by the state, the efforts by their lawyers to make sure that their appeal is expeditiously heard were foiled by the Junta,” says Kayanja Ahmed who has followed this case from its genesis. “Now that it’s approaching time for elections, Mr Museveni using the courts of law as his trojan horse is now trying to mend fences with the Muslim community in Uganda by releasing the Muslim leaders who have been under incarceration on frivolous charges. I hope the Muslim community will be able to understand this development as a political move but not a genuine move to grant justice to it’s leaders.
We need a free Uganda where institutions work independently,” he adds.

Today’s overhaul should be patterned with the recent acquittal of the notorious Boda Boda 2010 leader, Abdullah Kitatta who is currently lounging freely following an acquittal on Museveni’s orders.