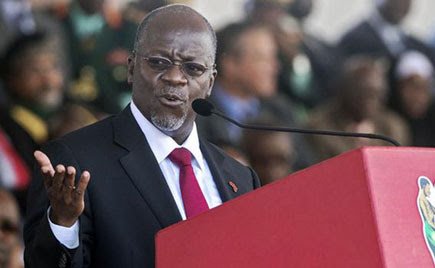 The Tanzanian president, John Pombe Magufuli has given his take on the looming Ugandan 2021 polls in which he reveals that the youthful musician-cum politician, Robert Kyagulanyi Ssentamu alias Bobi Wine has all it takes to succeed Museveni.

SEE ALSO: Bobi Wine lashes out at his academic stalkers

Magufuli, who is also seeking a re-election under the CCM party said this while addressing journalists on Tuesday. “Uganda may get the first smartest young, accurate and an intelligent leader,” Magufuli said in reference to Bobi Wine. “Kyagulanyi is young, intelligent and smart. That is the leader Uganda deserves to have,” he added.

Unlike Uganda, Tanzania just like Burundi are the only East African countries to hold their general elections in the constitutional way regardless of the existence of COVID-19. Photos of mass rallies in stadiums and political processions on major streets of urban cities of Tanzania have gained social media traction with people asking if covid really exists in East Africa’s second largest economy.

On Covid, Magufuli came under fire and global criticism for declining to impose covid precautionary restrictions. The leader instead asked journalists not to ever report about the cumulative cases. He made it clear that any media house that would defy would be stripped of their licences. Tanzania apparently faces a partial sanction from neighbouring Kenya which ordered their flights not to enter their skies. President Magufuli replicated with similar measures and asked Kenyan flights not to enter his territory too.