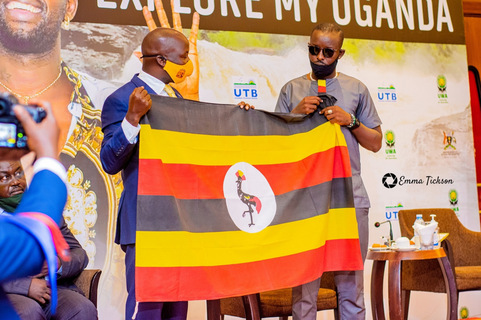 The Government has been trolled by social media users for the last two days after the appointment of singer Edirisa Musuuza alias Eddy Kenzos as the country tourism ambassador.

The singer was unveiled by the minister of state for Tourism, Godfrey Kiwanda during a news conference on Tuesday. According to Kiwanda, Uganda is not a one man’s responsibility noting that there have been other personalities that have taken on showcasing the beauty of the Pearl on their own personal made fame which are a resource to utilise in marketing Uganda.

However, some social media users in Uganda see the appointment as political, arguing that world athletics record breaker Joshua Cheptegei’s was better positioned for the job.

“Where does this leave @joshuacheptege1? Would be my favoured candidate for this role, by far,  than @eddykenzoficial,” one of the social media users tweeted.

Another one added, “Actually @joshuacheptege1is comparable to noone inFlag of Uganda in terms of being the tourism ambassador! That world record is miles away from a back-door BET of this @eddykenzoficial. It’s just political that the real tourism ambassador is left out. Even Sebunya Hamza is better.”

Joshua Cheptegei who ensured a thrilling return for competitive athletics last month as he shattered the much-vaunted 16-year-old 5,000m world record at the Monaco Diamond League has returned to training after 14-day Coronavirus quarantine.

Cheptegei’s astonishing display capped a warm welcome back for track and field for a season almost wiped out by the coronavirus pandemic, with fellow world champions Noah Lyles and Karsten Warholm also shining on the track.

Kadaga Tips Basoga in Diaspora to Invest in Tourism at Home