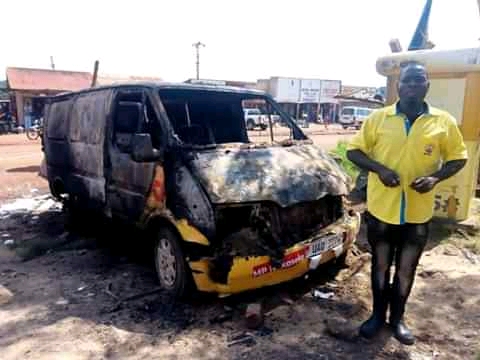 Nasur Lubowa, one of the area residents says that they got a notification from a security guard that the car was on fire. However, it was too late to save it.

Nsereko’s campaign manager Joshua Zaake says that they have been using the car to transport campaign posters and campaigners to the rallies. Zaake says that he has previously been intimidated by supporters of Arthur Nkalubo, a challenger within the NRM camp and incumbent MP Luttamaguzi Semakula.

Zaake explains that he has received reports that a group of about 20 people participated in the act in vengeance over Luttamaguzi’s detention. Luttamaguzi is currently on remand at Kasangati prison for breach of COVID-19 guidelines, cases which, according to his supporters, are politically motivated.

The Savannah Regional Police Spokesperson says that Police has so far arrested four suspects and they are being detained at Kiwoko Police Station to help in the investigations.