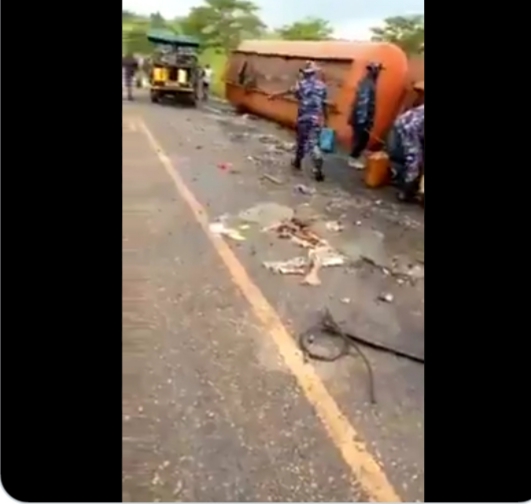 A footage of yet to be identified Uganda police officers siphoning litres of petrol from a fuel tanker that has got an accident somewhere in the upcountry this morning is making rounds on social media sparking a public outrage.

SEE ALSO: How COVID-19 is making money for the Uganda Police

The unprofessional conduct of the police officers has triggered outrage as the film gains traction. In the short clip, police officers donned in the Field Force Unit are seen involving in a looting expedition as they park their patrol by the highway to go and reap from the tears of the fuel driver who made this accident. The officers further drive off and return with 20 litre jerrycans which they fill past capacity and eve ferry more fuel in extra containers so they can sell it off and meet their domestic obligations.

No official statement regarding this tragic incident has been issued yet but sources on ground say the police patrol is still ferrying fuel in different trips. “They are siphoning as much as they can. One trip after the other as they ask us to keep away from the scene,” reports a gentleman who spoke to Ekyooto.

Away from that, accidents involving fuel tankers are considered to be the riskiest for the neighbourhood and in most cases people are urged not to get close to the tankers as explosions are anticipated due to the flammability of the petroleum products on board. Uganda itself has reported several tragic incidents where fuel tankers have exploded and killed dozens. In Namungoona and in the western district of Rubirizi, people died when they drew close to fuel tankers to loot.