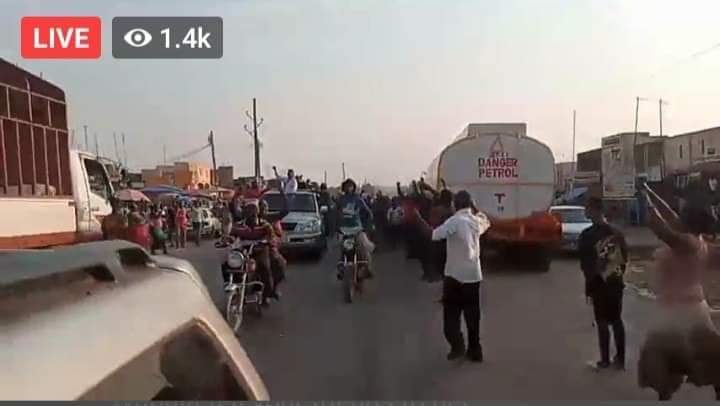 Throughout his journey, police was already deployed to avert scenes of crowding by the hordes of people who had planned to block roads and ask their endeared president in waiting to have a word or two with them. By morning hours, the presidential hopeful was already present at the venue. Bobi gave a heart thumping speech and commended the deceased for producing an artiste (Dr. Hilderman) too passionate to the struggle. Hilderman is apparently vying for the legislative seat of Mawokota where he seeks to unseat Trade Minister, Amelia Kyambadde.

At the same function was the renegade Gen. Elly Kayanja who was renowned for his ‘Operation Wembley’ in which witch hunted notorious robbers in the early 2000’s. The MC smartly ensured that the presidential hopeful gives his speech before Gen. Kayanja. No sooner had Bobi given his speech than the crowds started cheering and ululating.

Drama ensued when police erected barricades in all roads leading to Kyotera town in a bid to block Bobi Wine from leaving. Bobi’s security detail was smart enough and used feeder roads that led him to the town centre where crowds were already waiting. As usual, he was escorted by processions of Boda Boda cyclists as he clenched his fist to wield his symbol of hope. The event was streamed live on his Facebook page where Ugandans ushered him with love in the comments section. Unlike the usual detractions by police, Bobi today peacefully drove out of Kyotera town.