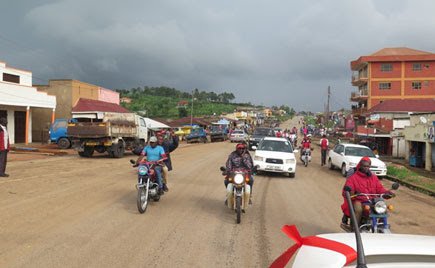 It looks like the arrest of the incumbent Ruhsenyi county MP and state Minister for labour, Mwesigwa Rukutana is officially a public holiday in his constituency in Ntungamo district.

Since morning time, people have been on the streets jubilating and dancing to the arrest of their area MP with many even pleading with the judiciary to give him a life sentence so they get rid of him for good. Scenes of people playing loud music, carrying tree branches and Boda Boda cyclists riding on the major town streets with sirens on is what has rocked this Sunday. “We want to send a signal to those so called untouchables. What goes up must come down. Rukutana has been a very ruthless leader. We hope he rots in jail,” shouts one of the protestors. “This should be a signal to the emperor himself (Museveni) that his untimely demise too shall come. We want civilian rule to be revived,” added the protestor.

Mwesigwa Rukutana was arrested on Saturday by the SFC on the orders of president Museveni. He was intercepted as he proceeded to Rwanda to seek refugee. Sources in security intimate that the former deputy attorney general in his capacity as the custodian of law was incarcerated in the coolers of Mbarara Central police station after efforts of evacuating him to Kampala were interrupted by the stormy weather as the UPDF pilot could not fly the chopper in such a time.

In his defence statement, the minister says he sensed danger after supporters of his opponents tried to gather around him and hence he had to grab a gun from his escorts and save his life. He claims to have been intercepted by a road block staged by the opponent in a bid to allegedly humiliate him over losing the NRM party primaries. Rukutana and his three escorts remain in custody pending further investigations.