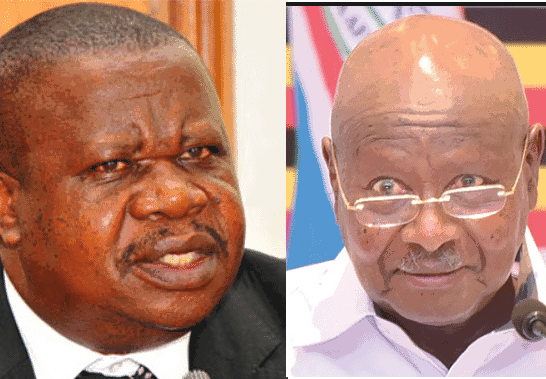 Otafiire who currently serves as the East African affairs Minister has expressed his concern about how Museveni is reportedly sidelining NRM cadres. A source close to the development says an infuriated Otafiire and Museveni clashed in a phone call conversation where the former accused the latter of trying to play saint yet he is the chief custodian of bloodshed.

On Sunday evening a delegation on which Otafiire was part tried to process police bond for the incarcerated Rukutana who is languishing at Mbarara central police station. We last evening reported that the bail had been processed and granted after Ankole tycoon, Ben Kavuya offered some cash to the OC and by last night, the embattled Rukutana had slept at Minister Bright Rwamirama’s residence.

However, this Monday morning when Musevenu heard about the bond process, he hurriedly wrote a missive and guided his security detail to capture Rukutana and have him tried in the courts of law. “Minister Rukutana is in jail and will be prosecuted. They will be fully accountable with robust charges: assault, attempted murder, murder, etc” Museveni said in a missive issued this morning. Museveni directed the cancellation of Rukutana’s bond. This site has reliably learnt that the errant Minister is to be arraigned before court any day of this week to face several charges that have been pressed on him.