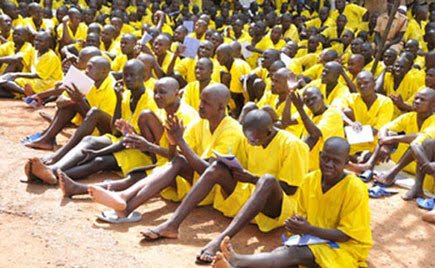 The Commissioner General of government prisons, Dr. Johnson Byabashaija has ordered an immediate probe into the critical concerns raised by the Nakaseke South legislator, Luttamaguzi Ssemakula who was last month detained at Kitalya prison.

The legislator in a televised statement this week narrated his ordeal while he was kept in custody of Kitalya. A tearful Luttamaguzi retorted of how they were piled in a small prison ward with no breathing space as if they were biscuits in a sachet. The legislator who apparently is under medication also decried the harsh treatment he underwent while he was in incarceration. “Every two inmates were given a cup of water to share a day. The prison warders served maize flour that was milled with parts of the maize seeds. The posho they serve can even tear apart the stomach of a pig,” recounted Luttamaguzi.

Kitalya government prison is one of the most congested government facilities. Sources say, the regime created it to mainly detain political activists aligned to the People Power movement. About three months back, we reported Makindye west NUP MP hopeful, Musiri David who narrated to us his ordeal and declared Kitalya a local version of the US owned ‘Guantanamo bay’. Musiri said several youths are held at Kitalya with no hopes of appearing for court bail and the same narrative has replicated in MP Luttamaguzi’s remarks.

Byabashaija now wants action to be taken and have some of the implicated officers apprehended. Although this probe may be instituted, it will not be fruitful since reliable information reveals that Kitalya is actually run by Special Forces Command troops who dress in prisons service uniform. It was mainly established as a political strategy to quash and extinct the opposition forces in a bid to prolong Museveni’s life presidency. Uganda is believed to be Africa’s second most prisons congested nation with a total of 55,229 inmates.