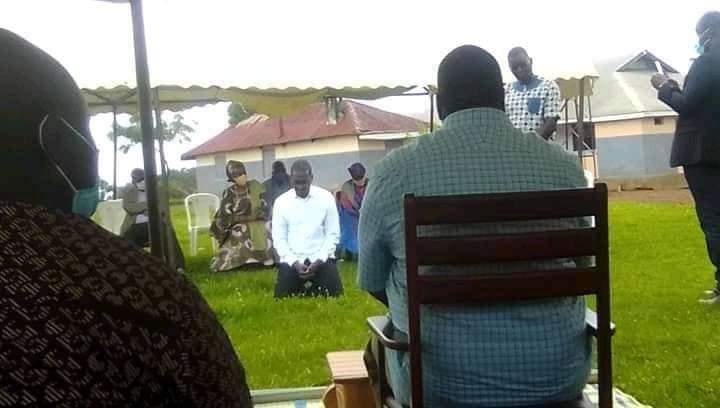 Credible reports indicate that renowned city socialite, Mathew Kanyamunyu has rushed to Akena’s ancestral home in Acholi to formally ask for forgiveness after several years of being haunted by the deceased Akena’s ghost. People in Kanyamunyu’s neighbour say ever since the tycoon fatally murdered the child rights activist, he has never been at peace. All his once flourishing businesss have stagnated and his home is haunted by the spirit of Akena.

SEE ALSO: Dear Uganda Judiciary, Will Kanyamunyu ever pay for his sins?

Photos of a humbled Kanyamunyu kneeling before relatives of the deceased are gaining traction on social media with many wondering how the matter is being solved outside court. Kanyamunyu has already performed the local Acholi ‘Matto Oput’ ritual which is a reconciliation ceremony between the murderer and the murdered. The ceremony is performed to bar the ghost from further haunting the killer. Parties to the ritual say, Kanyamunyu has fulfilled most of the requirements and has even offered some livestock to be sacrificed, on top of offering an undisclosed sum of money to the family members of the deceased.

SEE ALSO: Court orders separate trials for Kanyamunyu and 2 others

In the year 2016, Kanyamunyu came into the spotlight after tragically shooting a child rights activist, Kenneth Akena at Game Lugogo after a parking lot scuffle. Present eye witnesses said Kanyamunyu angrily shot at Akena before dramatically rushing him to hospital where he breathed his last due to over bleeding.

Kanyamunyu, a youthful flamboyant businessman and a connected mogul was later arrested after a public outrage and pressure exerted by human rights activists. His Burundian girlfriend, Cynthia Munwagari was also arrested. But as time went on, the duo were released on bail and urged to keep a low profile, a thing they have successfully done for the past 4 years.