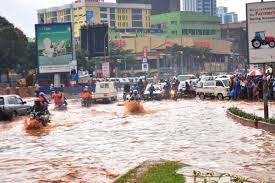 Atleast two dead bodies have been recovered along Nakivubo Channel at Clock Tower near Total fuel station following a heavy downpour in Kampala on Friday.

The bodies are suspected to have been carried by flood water from different places of the city. According to the Kampala Metropolitan Police spokesperson Onyango Patrick, the first body to be retrieved is of female juvenile aged 12 years, identified as Namazzi Alyera, a resident of Nsambya Kitooro, Makindye Division, Kampala Capital City.

“It’s alleged that Namazzi was playing with her friends during the rain and their ball fell in the trench. She tried to remove the ball, but the water overpowered her and swept her away.Her body was swept up to Clock Tower, where a boda boda rider saw it and informed the police.” Onyango said.

He adds that police went and retrieved the body but while still carrying on their work, another body appeared and it was also removed.

Onyango says the body was not identified but it is of a male adult as he further appealed to members of the public to be very cautious during this rainy season.

Heavy rains have been pounding different parts of the country displacing several with some reported deaths, due to blocked drainage systems.