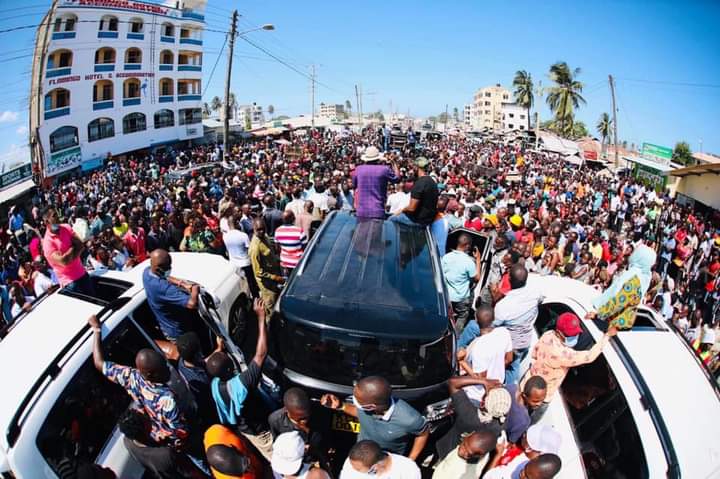 As the electoral gear heightens in East Africa’s largest economy, politicians aspiring for various elective positions have demonstrably proved that the concept of the scientific elections cannot be applicable.

Kenya, just like Burundi which just concluded her polls is embarking on mass rallies as a mode of campaigns despite the spiking covid cases. On Saturday, the ODM presidential candidate and veteran politician, Raila Omollo Odinga combed through the busy streets of Mombasa compelling thousands to crowd around him. He unleashed his gusto amid loud cheers and ululations from his supporters. Odinga is rivalling the incumbent Deputy president, William Ruto who also declared his bid to compete for the top seat.

Similarly in Tanzania, the incumbent president, John Pombe Magufuli of the CCM party tasked the Electoral Commission to adhere to the traditional constitution and do away with any adjustments. Reports from Tanzania indicate that Magufuli even organizes mass rallies in stadiums and people convene to listen to his speeches. The East African leader who seeks a reelection has been at loggerheads with his scientists whom he routinely accused of doctoring results. He reportedly deployed plan and animal DNA to be tested for COVID-19 and when the results turned positive despite the organs being non-human, Magufuli sacked the head of the Tanzanian laboratory. He went ahead to censor the press from giving covid ‘irrelevant’ coverage and tasked the health experts not to ever tally results.

Unlike Kenya and Tanzania, Uganda declared to have a general election in the scientific way. But what has already surfaced in the ruling NRM party primaries proved the entire scientific polls concept is a hoax that should be dropped.