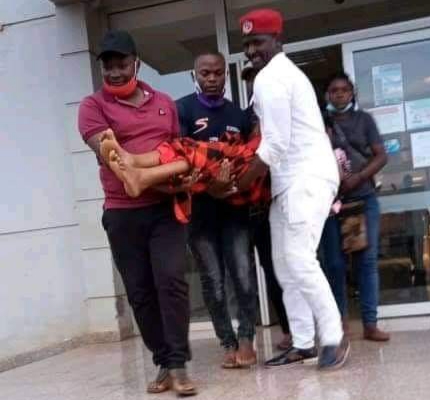 The National Unity Platform party coordinator and woman MP aspirant, Manjeri Kyebakutika was on Sunday prematurely arrested while addressing the media after the Kyabazinga function at the Busoga palace.

Manjeri who was smartly donned in her red beret and attire identical to the National Unity Platform party was embarrassed right infront of cameras when police officers intercepted her address and scooped off her beret before pulling her to the waiting patrol vehicle as she tried to resist. Although her arrest was covered on camera, police rushed to order scribes of journalists to erase that particular scuffle out of their digital cameras. The shameless operation was led by a one Moses Kamomo who is the serving Officer in charge of Jinja Central Police Station. At the same ceremony, the speaker of parliament, Rebecca Kadaga was present alongside several Jinja NRM politicians.

Manjeri’s arrest has however triggered widespread outrage as members of the NUP urge the police to release her unconditionally without fail. “It is absurd that the people in power are frightened at the sight of the people with power and resort to infringement of human rights. The red beret breaks no law and it’s our only symbol or resistance and resilience against dictatorship. We stand with her (Majeri) through this and we call for her unconditional release,” reacts her opponent on the NUP ticket. By the time of filing this report, Manjeri had been released on police bond without any charge. She is currently undergoing medication at a local Jinja clinic.

It should be noted that at the peak days of the People Power movement in 2019, the UPDF stepped in and degazetted the red head gear and outlawed the Bobi Wine beret with immediate effect. Despite the attempted ban, People Power supporters countrywide contested the move and have persistently donned in the outlawed attire.